The Washington Post finally has the review of Becoming Jane. The complete article can be found here, and the excerpt is below: 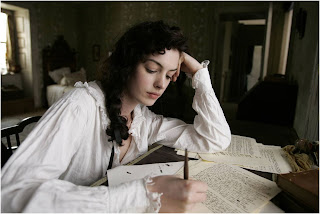 A New Film Imagines Jane Austen in Love. It's Stirring All Sorts of Passions.

"Becoming Jane," starring Anne Hathaway, is a romantic dramedy based on the life of the author herself. To which fans might say: Holy Mr. Darcy's wet smock! And to which Jane Austen scholars are saying: Uh-oh.

The press materials released with the movie hedge any bets: The film "spins the few known facts" of a "seemingly brief" and "apparently rapid" romance into a "boldly imagined" love story about Austen and the man who "perhaps, might have stolen her heart" and "awakened" her talent.

It is this definitive love story that inspires such consternation.

Foils, fabrications and fudging aside, we're rooting for the doomed couple, but why ? We're perfectly able to handle the writerly miseries of other artists -- Shakespeare losing Viola or, more realistically, Hemingway drowning in drink -- so why the burning need for Jane to find love?

Because Jane loved love. Emma Woodhouse and the Dashwood sisters did not just find good matches, they found wildly perfect soul mates. We want Jane to find love because thinking of her living without it makes us feel sad, and vaguely guilty for reveling in those fictional romances.

And because Jane played by the rules. She did not abandon her family (Shakespeare), act promiscuously (Wilde), or become an alcoholic (HemingwayFaulknerFitzgeraldSteinbeck). She was the type of well-behaved person our meritocratic society believes deserves happiness. A loveless Jane Austen? How Dickensian.

These fanciful wishes for Austen might explain why the British press was mostly kind to the film: The Daily Mirror called it "delightful and nicely made"; the Times deemed it "giddy as champagne bubbles" despite the "few liberties" taken.

And there are some Austen scholars who welcome the movie.

Leading the pack is Spence, who was tsk-tsked for suggesting in his book a deeper romance between Austen and Lefroy than had previous scholars. (Not nearly, however, as passionate as the film implies; read: Frenching in the courtyard!) "The film captures Jane Austen's spirit and her values," Spence says. "I think she would have rather liked it. Besides, could you really make a movie where Jane flirts with a man and then never sees him again? What kind of a movie is that?"

Movie quality aside, there is also the likelihood that the film will draw popular attention to Austen -- the woman, not just her work. "Yes, it's a blend of fact and fiction," says Marsha Huff, president of the Jane Austen Society of North America. "But hopefully some people will be inspired to dig a little deeper and find out which parts are true."

Therein lies a quandary. When your entire career is spent toiling in relative obscurity, studying the life and slim six novels of a dead writer, how do you react to your one moment in the spotlight? Do you quibble about factual liberties taken? Or do you excuse its foibles in the name of "Please, oh please allow Jane one clandestine affair!"

Jarrold not surprisingly insists that it's possible to do both. "We have this image of Jane Austen as a middle-aged spinster," the director says. "But there was a time when she was young and vibrant." Veracity aside, he says, "in terms of human relationships, [the story line is] true." In some ways the idea of a stoically teary-eyed Jane makes us appreciate the happy-ended worlds of her heroines even more.

Even the doubting Le Faye hopes some good can come from the film. But, says the author: "It still ought to be marketed with a health warning."

I will be going tomorrow night and I am so excited!

Yup, the NY Times I've noticed before, but it's rather too complex to put here. Anyway, all the latest news of BJ can be found in the left bar, under the Google News (that's the great thing about blogging!).

But thanks for the library scene! Many girls would want him to 'widen' our horizons! :-D