I put the word advice between the apostrophe for, although in the following letter Jane Austen indeed gave enthusiastic and romantic advice to her niece Fanny Knight (daughter of Edward Austen, who later became Edward Knight), I believe she meant to say something more (and thank God that Cassandra did not confiscated this letter, heheh…).

On November 18, 1814, Jane wrote to Fanny Knight a letter, commenting on Fanny’s infatuation and love towards a certain ‘Mr. A’ who apparently managed to steal Fanny’s heart (Jane was glad that Cassandra, or as she wrote ‘your Aunt C' was having dinner 'at the other house’ thus she did not have to ‘manoeuvre away from her’). Her letter was full of loving gossips towards her niece’s love; she even read Fanny’s letter ‘through the very evening’ she received it and ‘could not bear to leave off' as she began reading. 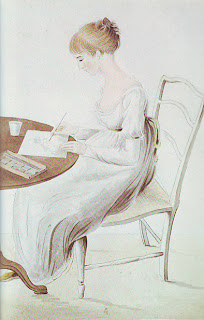 Not clear who this Mr. A was (the Brabourne edition wrote him as Mr. A, whereas the Chapman edition said ‘Mr. J.P.). I don’t think Fanny married this guy anyway… for she later married Sir Edward Knatchbull. But anyway, Jane criticised Fanny of her mistake, and at the same time comfort her:

‘Your mistake has been one that thousands of women fall into. He was the first young man who attached himself to you. That was the charm, and most powerful it is. Among the multitudes, however, that make the same mistake with yourself, there can be few indeed who have so little reason to regret it; his character and his attachment leave you nothing to be ashamed of… You certainly have encouraged him to such a point as to make him feel almost secure of you [this is found in the Chapman edition, not in Brabourne] – you have no inclination for any other person. His situation in life, family, friends, and, above all, his character, his uncommonly amiable mind, strict principles, just notions, good habits, all that you know so well how to value, all that is really of the first importance, everything of this nature pleads his cause most strongly. You have no doubt of his having superior abilities, he has proved it at the University; he is, I dare say, such a scholar as your agreeable, idle brothers would ill bear a comparison with.’

Anyone thinking that Jane was speaking from experience, i.e. involving Tom Lefroy? Not sure if Tom was the 'first young man who attached himself' to Jane, but Tom was after all an excellent student at his college. Let’s read the next sentence: 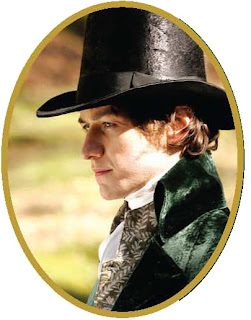 ‘Oh, my dear Fanny! the more I write about him, the warmer my feelings become -- the more strongly I feel the sterling worth of such a young man and the desirableness of your growing in love with him again. I recommend this most thoroughly. There are such beings in the world, perhaps one in a thousand, as the creature you and I should think perfection, where grace and spirit are united to worth, where the manners are equal to the heart and understanding, but such a person may not come in your way, or, if he does, he may not be the eldest son of a man of fortune, the near relation of your particular friend and belonging to your own county.’ [Brabourne edition used ‘near relation’ as opposed to ‘brother’ as in Chapman’s’ edition, bolded sentence by Icha]

Now… was that not Tom Lefroy there that Jane actually wrote about? After all, Tom was 'the near relation' or nephew of Jane's 'particular friend' Mrs. Lefroy, was not 'the eldest son of a man of fortune' (though Tom was the eldest son of Anthony Lefroy), and did not belong to Jane's own county (he was from Ireland). Yes, to me, Jane was inserting Tom there.

By that year, Jane might have heard that Tom was increasingly becoming a Calvinist and Evangelist; a fact that was rather disagreeable for her. I think she included that particular feeling of hers in her letter to Fanny:

‘And, as to there being any objection from his goodness, from the danger of his becoming even evangelical, I cannot admit that. I am by no means convinced that we ought not all to be evangelicals, and am at least persuaded that they who are so from reason and feeling must be happiest and safest.’ [bolded sentence by Icha]

After all those advices, Jane concluded her letter with another suggestion that apparently was taken from her own experience:

‘And now, my dear Fanny, having written so much on one side of the question, I shall turn round and entreat you not to commit yourself farther, and not to think of accepting him unless you really do like him. Anything is to be preferred or endured rather than marrying without affection; and if his deficiences of manner, &c. &c., strike you more than all his good qualities, if you continue to think strongly of them, give him up at once. Things are now in such a state that you must resolve upon one or the other -- either to allow him to go on as he has done, or whenever you are together behave with a coldness which may convince him that he has been deceiving himself. I have no doubt of his suffering a good deal for a time -- a great deal when he feels that he must give you up; but it is no creed of mine, as you must be well aware, that such sort of disappointments kill anybody.’ [bolded sentence by Icha] 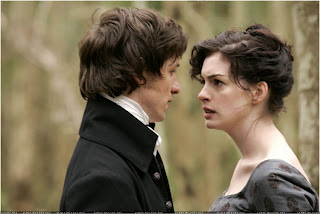 That Jane chose ‘anything’ to ‘marrying without affection’ was clear there. She might also wish that Tom also did the same thing, though… so that he did not suffer a great deal, a disappointment that ‘kill anybody’. By the way, Radovici (p. 34) noticed similar thing in Letter 106 (November 30, 1814): 'nothing can be compared to the misery of being bound without Love, bound to one and preferring another...'

By the way, Lord Brabourne was Fanny’s grandson who compiled JA’s letters (Fanny inherited Jane’s letter from Cassandra after Cass’ death). There are several omissions in the Brabourne edition that I as an amateur Janeite do not know why. But, this particular omission of post-script amuses me:

‘Your trying to excite your own feelings by a visit to his room amused me excessively.’

Fanny Knight visiting Mr. A (or Mr. J.P.)’s room was amusing for Jane! My oh my… despite reaching 40 years old, Jane Austen had not lost her sense of humour. Or, to be exact, sense of adventure and mischief!

Pic 4: Jane and Tom, from www.james-mcavoy.net

My god Icha, you have been a very busy bee! Your scrutiny of the letters is fantastic and in my opinion spot on! Her words are so adament and filled with passion and emotion; in my opinion, a response to a personal experience. I do love the last pic of Jane and Tom (Anne and James)- it again displays the looks of distress and passion which that scene captures so perfectly.

I spotted the letter by chance as I was looking for info on Anna's wedding with Ben, and it really extended my Jane hour to well past my dinner time!

And thank you, I also love that pic of Anne and James, it showed their emotions, angers, dismays exceedingly well.

I started reading some letters too.

Your articles are really good and I enjoy reading them!!!
Thank you!!!