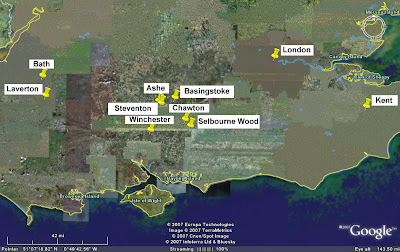 I just learned how to make maps with Google Earth, so I made this map of places Jane Austen and Tom Lefroy visited in Becoming Jane, plus some other important places in Jane’s life (Mozilla Firefox: Right-click to open in new window for better viewing; Internet Explorer: just click the map, it will open in a new window).

Now, here’s the list of important places in Hampshire:

Selbourne Wood (now Selborne), where Tom got lost in the forest and met Jane again

, where Tom and Jane first danced in the Basingstoke Assembly

Ashe, home of the Lefroys, where our favourite couple exchanged banters in the library

- Laverton (in Somerset), where Tom took Jane to see the Laverton Fair

, where Tom took Jane to see his uncle and writer Ann Radcliffe

, where Jane went to see Cassandra after the visit in 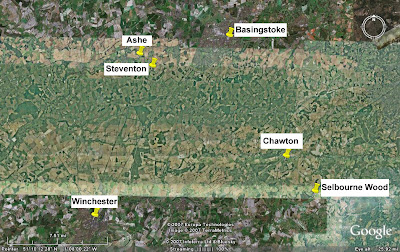 The maps are not perfect; I still learn how to make it better. However, Google Earth features showed that Tom took Jane almost 40 miles from Steventon to Laverton! That’s a whole day of going back and forth in Austen's time! Watching the Laverton Fair, eh? No wonder Mrs. Austen was uber-worried...

But, note what Darcy said to Elizabeth Bennet in Pride & Prejudice (volume II chapter IX): 'And what is fifty miles of good road? Little more than half a day's journey. Yes, I call it a very easy distance.' Hah! Way to go, Mr. Darcy. Apparently, Mr. Lefroy also thought of the same thing... 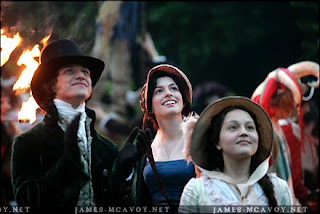 Steventon to , by the way, is also about 40 miles. Steventon to Ashe is only about 1.5 miles, BUT Steventon to Selbourne Wood is about 15 miles! What the heck was that girl doing there?! Unless, there was another Selbourne that is currently not in the modern map…and just at the backyard of Steventon.

Pic: Jane, Tom and Lucy in Laverton Fair, from www.james-mcavoy.net

Icha, this post is just fab! I had something similar in mind but was not sure how to present it, you have done a great job!
I am so glad you wrote the paragraph about the distances as this is also something that has been puzzling me! When I visited Chawton I noticed that Selborne Wood was not far and this consequently meant that it was a significant distance from Steventon. Very intriguing but we do know that Jane liked to walk! At that time it was the norm to travel large distances on foot. Anyway thank you for this post!

Oh, thank you darling... I was a bit worried with the map (I'm still learning...), but thank God you like it.

And thank you for confirming that the Selbourne Wood was supposed to be the current Selborne. Gosh, 15 miles is a long way for Tom to walk, eh? Especially when afterwards he received rebukes from Jane. LOL!

Cool. I have a map with Jane sites, but it is two-dimensionally dull. This one is so much better.