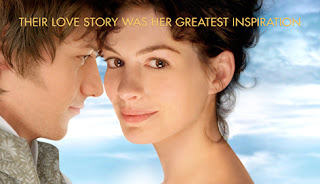 I am happy to compliment the U.S. Official Site for finally giving Jane what she deserves. The production notes are particularly interesting to read, though I have to say the explanatory texts are a bit too small. Hence, I took this article below verbatim from the Production Notes section (under the ‘Observing Jane’) for your convenient reading. Two words: homage and reverse engineering. I agree that Becoming Jane is not copying other Jane Austen movies in negative ways; it instead pays homage to Austen’s genuine works. Enjoy!

In a kind of reverse engineering, BECOMING JANE utilizes key scenes and characters from Jane Austen’s novels – from the beloved Pride and Prejudice all the way to the lesser known Northanger Abbey and Persuasion – to forge the film’s depiction of Jane and Tom as a man and woman caught up in a courtship driven by heady feelings but complicated by money and mores. Austen scholar Joan Ray has identified several areas after a single viewing where the film converges with Austen’s fiction, including: 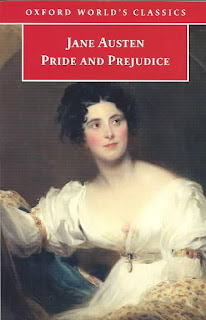 Harking back to Pride and Prejudice, Jane’s character resembles both the flirtatious Lydia Bennet who loved to dance and later Elizabeth Bennet who engages in witty repartees with Mr. Darcy, much as Jane does with Tom Lefroy in BECOMING JANE.

Tom Lefroy at first resembles Wickham, who in Pride and Prejudice was studying law with rather haphazard study habits, and also Darcy in the pejorative way he tends to judge country people.

Lady Gresham, the character played by Maggie Smith, closely resembles Catherine de Bourgh from Pride and Prejudice, Darcy’s wealthy aunt who didn’t want Elizabeth Bennet to marry Darcy. Lady Gresham is controlling and opinionated, like Lady Catherine, and Jane in the film even runs aside to scribble a note when Lady Gresham mentions a “little wilderness or shrubbery,” just as Lady Catherine does when she visits Elizabeth to discourage her from marrying Darcy.

Jane’s heightened emotional reactions resemble those of the sensitive Marianne Dashwood in Sense and Sensibility.

In BECOMING JANE, Countess Eliza has a pug dog, just as she did in real life, and as does Lady Bertram who spends her days on the couch petting her pug in . 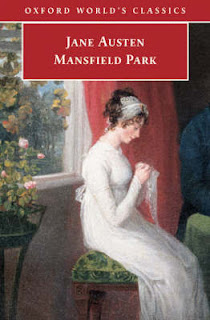 In , Lady Bertram tells her impoverished niece Fanny Price that it is every woman’s duty to marry well and Lady Gresham is given similar lines in BECOMING JANE.

Jane and Tom visit the popular Gothic novelist Ann Radcliffe in BECOMING JANE, while Catherine Morland in Northanger Abbey is reading Radcliffe’s Mysteries of Udolpho, which fires her imagination.

In Northanger Abbey, Jane Austen defends the art of writing novels, noting that it is in books that “the most thorough knowledge of human nature, the happiest delineation of its varieties, the liveliest effusions of wit and humor are conveyed to the world.” Jane is given a similar line as a young writer in BECOMING JANE.

The scene where Jane and Tom are in the staircase in Uncle Benjamin’s house provides a quick homage to the staircase scene with Henry Tilney and Catherine Morland in Northanger Abbey.

The heroine of Persuasion, Anne Elliot, breaks off her engagement with Frederick Wentworth, despite her true love for him, in a similar fashion to the way Jane does with Tom Lefroy in BECOMING JANE.

When BECOMING JANE imagines Jane meeting Tom Lefroy again at a concert of Italian music this mirrors the moment in Persuasion when Anne Elliot sees Wentworth at a concert and, though realizing that he loves her, is unable to communicate with him, wondering “How was the truth to reach him?”

I think that for the last scene (when Jane meets Tom again at the concert), there is no need for the question "how was the truth to reach him?" The truth of their love was so apparant in this scene without the need for words, it was simply etched onto their face and in their eyes.

Oh, that I agree. The truth just flooded the entire room, actually. Of course, the only people who felt it, in addition to Tom and Jane themselves, were Henry and Eliza, for they were aware of the history...