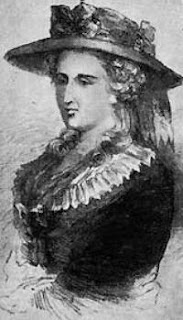 In the film Becoming Jane, Jane Austen visits Cork Street in London (see Cork Street post; Cork Street, London ) and stays with Tom Lefroy and his uncle, Benjamin Langlois. During the short visit, Tom takes Jane to see Ann Radcliffe, the famous author of that time who ‘redefined the gothic novel as a metaphor for the female experience’ (Smith, 2003). Researchers have suggested that Radcliffe examined gender and the differences between male and female by focusing on the problems of dependence and isolation in women and how this may lead to problems of anxiety in a world dominated by men. Although Jane’s visit in the film is fictional, it is known that Jane highly respected, admired and was influenced by the work of Ann Radcliffe so we thought it important that she be acknowledged here.
Jane read Ann’s novels and even famously wrote a parody of The Mysteries of Udolpho in Northanger Abbey (1818). Catherine Morland reads Ann’s novel voraciously and this scares her and leads her to suspect a murder that has not taken place.


Ann Ward was born on July 9th 1764, in Holborn, London. She was the only child of William Ward, a haberdasher, and his wife Ann Oates. Little is known about her childhood except that she was well educated and spent most of her time with other family members and not her parents. When she was 24 she married the Oxford law graduate and editor for the English Chronicle, William Radcliffe.

Although it was considered a happy marriage, they did not have any children so Ann decided to start writing fictional novels; this was highly discouraged at that time due to her gender and the perception that she should not upstage the career of her husband. Disregarding this criticism, Ann had The Castles of Athlin and Dunbayne published in 1789. This was the start of a collection of novels focusing on mysterious castles which often played a pivotal role and was central to a very dark premise. Her writing consistently includes ghosts and spiritual voices and this allows the female heroines to test themselves and their inner strength in order to gain independence. She also frequently used landscape as a way of allowing the reader to identify and understand the characters and also to encourage the poignant themes of a society oppressing women. I think that it is a very interesting fact that the publishing records for her novel, The Romance of the Forest (1791), actually list her husband, William Radcliffe, as the author and he received £40 for the second edition. 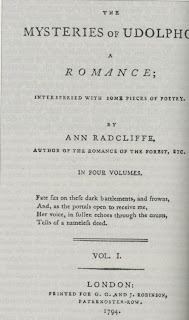 Her writing was very popular, particularly among young women and her collection includes: A Sicilian Romance (1790), The Mysteries of Udolpho (1794) and The Italian (1796). Her last novel, Gaston de Blondeville (1826), was published after her death. She became the leading name in the genre of gothic romance and respected by many other famous writers, e.g. Mary Shelley, Charles Dickens. Her work was printed in Italian, German, French and Spanish and she became wealthy and highly recognised.
In addition to her talent as a writer of novels, she was also a poet and often included poetry in her novels. She had a poem published in 1826, again after her death, called St. Albans Abbey.


She was, however, somewhat of a social recluse. She would avoid social occasions and is famous for having never visited many of the places that she wrote about. For example three of her novels were based in Italy and she had never actually been there herself. Many historians have speculated that she may have suffered from mental illnesses such as depression or anxiety or both. According to her Memoir, ‘the very thought of appearing in person as the author of her romances shocked the delicacy of her mind’. The filmmakers of Becoming Jane presented this likelihood very well- when Jane Austen visits her home, there is a sense of social unease and discomfort. She stopped writing in her 30’s and this caused rumours at the time that she was insane or had in fact died. It is bizarre that she never corrected these allegations and instead remained very private in the comfort of her own home. Her life was such a mystery that a biography was abandoned by Christina Rossetti due to a lack of material.


It is interesting to think of the influence that Ann Radcliffe’s work has had on today’s culture; her themes have inspir

ed plays and operas, and the genres of psychology and horror which are so frequently translated into literature and film.
On February 7th 1823, at the age of 58, she caught pneumonia (she had suffered from asthma for twelve years) and died. She was buried in a vault in the Chapel of Ease belonging to St. George’s, Hanover Square, in Bayswater, London.


Arnie provided the very interesting information that he read in The Recess by Sophia Lee that Ann Radcliffe may have been a parlour boarder at Sophia Lee’s boarding school in Bath and this means that there is the possibility that at that time she may have met Jane Austen. This is by no means proven but it does give validity to the film’s speculation that Jane met Ann at some point in her life, whether it was in London or Bath.
Jane was once described by one of her brothers as ‘enamoured of the picturesque’ which further supports why she would have been a fan of the work of Ann Radcliffe and have been influenced more than perhaps we realise?

Pic 2: Title page to The Mysteries of Udolpho, the novel which inspired Jane to include it in Northanger Abbey. Taken from Jane Austen The Parson’s Daughter, by Irene Collins. Published in 1998.

Pic 3: Photo illustration to represent the work of Ann Radcliffe. Taken from The University of Maine website, at http://umainetoday.umaine.edu/issues/v3i5/gothic.html

Excellent post, my dear, thanks a lot! (Also thanks to Arnie for the hint of Sophia Lee). I find it particularly interesting in BJ movie that Ann indeed, as you said, was rather...disturbed. As if she had secrets of her own that made her wrote the novels.

My Gothic slash romance sense tells me that she might have a 'sad past' as well, not unlike Jane and Tom. Remember how she looked at the couple as they walked down the stairs? She saw what happened between Jane and Tom, and she feared for them.

Oh, and Linda posted me this link:
http://www.theloiterer.org/ashton/year01/post101c.html#23L

Her analysis... or shall I say 'first impression' about Mysteries of Udolpho.

A very interesting analysis. I have Udolpho at home (from the library), but I haven't read it - only took some poems from it (lots of them!). I didn't realise that Jane, um... adopted the term 'first impression' from Radcliffe!

Thanks Icha.
I should have included my perceptions of the scene from Becoming Jane when Jane meets Ann. As Jane and Tom leave, that 'expression' that Ann makes as they walk down the stairs is vital! You are right, it is as if she knows that for Jane to be successful as a writer, a future with them together would be very unlikely. She did indeed fear for them and this may be a reflection of her past experiences.

I just read the link that Linda kindly provided (thanks Linda!) and I have to say that all must read it! It provides real insight into the influence that Ann had on Jane and her writing. I particularly like the line: "IMO the "story" was gift wrapping for the "lesson". From the research that I did on Ann, I think that this woman had an amazing mind and she had so many issues bubbling up inside her that she wanted to discuss and 'teach' others that she translated them into her stories.