I’m moving ‘Jane Christmas Lefroy’ to her own section because it’s getting too large to put under her father’s section (Tom Lefroy). Anyway, I hope you guys bear with me… for it’s seemingly gonna be a rather long ride. 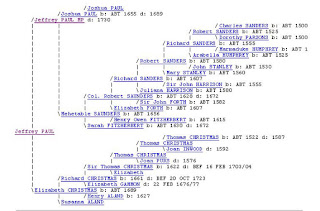 This picture here is taken from Tim Sandberg’s Genealogy Database, a very good one, I should say, for it’s free and provided me the answer for the Pauls and Christmases (not for the Lefroys, though, surprisingly…). Up until now, I never knew that Christmas is a family name. See Henry Christmas for example. Loads of his descendants.

Anyway, Elizabeth Christmas and Jeffry Paul had several children, including the Jeffrey Paul Jr., who later married to Margaret Morris (daughter of Benjamin Morris) of Co Waterford, Ireland. Hence, Elizabeth Christmas was NOT Mary Paul’s grandmother or Jeffry Paul’s mother or something like that; so that ruled out the idea in my previous post that ‘Jane Christmas Lefroy’ was named after Mary’s grandmother…for the moment. I will still try to find Mary Paul’s and Jane Paul’s dates of birth, see if they have December or Christmas connections; also if any of their female ancestors have any relationships with the Christmases.

Sigh… Tom, where do you take me now, lad? I need to take a break, I start to see everything as family trees now…

As long as you always keep in mind that you are looking for a "forest" of pattern and meaning, you will never get lost wandering among those family trees. ;)

Haha, very well put Arnie!! What a picturesque forest this is turning out to be!

The key to finding one's way through it is to spot the "bread crumbs" that Jane Austen sprinkled behind her as she walked briskly through that forest of her own creation! If you find and follow them all, you will arrive in the end at the destination she created just for us. ;)

I agree that JA left loads of breadcrumbs, Arnie... and you're very good at spotting them as well.

What I just realised last night was that I had started following TOM's breadcrumbs... and that starts with the Memoir of Chief Justice Lefroy, and the lastest one, which is Jane Christmas Lefroy.

Linda suggested me to look for the son of Jeffry Paul and Elizabeth Christmas, who was also Jeffry (Jeffrey?) Paul. But this bloke married to Margaret Morris, and not Jane Paul.

There were some other Jeffry Pauls scattering around... but I think I'd rather go back to Mary's Jeffry Paul and trace back from there.

From Tom's part, I think his ancestors are not linked to any Christmases...

thanks for the comments, guys!