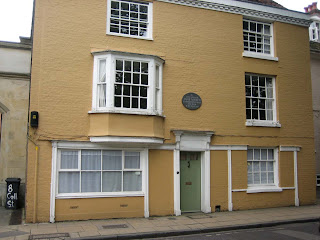 As Jane Austen’s health was persistently declining since early 1816, she had to accept her family’s request to move to to be closer to Mr. Lyford, her medical doctor. On , Jane and Cassandra moved out of Chawton and traveled to with a carriage, with faithful Henry and William Austen (Edward’s fourth son) riding alongside the carriage. Upon their arrival in , the Austen sisters resided in (the building still exists now as a private house). Tomalin (2002) wrote that the house was a two-storey house with two sitting rooms, a bow window and two nice bedrooms at the back. Mary Austen (Jane’s niece, daughter of Frank Austen) was sent from Steventon to help Cassandra taking care of Jane. Although Jane insisted that she was getting better, her health did not improve so much; ‘Mr. Lyford has candidly told us that her case is desperate… Lyford said he saw no sign of immediate dissolution’, as James Austen wrote in June 1817.

And so it was. On Jane Austen wrote her last poem (‘When Winchester Races’), which contained among others the following lines:

'Oh! subjects rebellious! Oh Venta depraved
When once we are buried you think we are gone
But behold me immortal! By vice you're enslaved
You have sinned and must suffer, ten farther he said

Venta, by the way, is an old name for . Tomalin (2000) argued that the second line should have naturally ended ‘dead’, as it rhymed with ‘said’, but either ‘Jane could not say the word, or her sister could not bring herself to write it down’. And now, having learned that Jane loved doing anagrams and other riddles (see Sheehan's and Arnie's analysis of Emma for example), I was wondering if her last poem also contained other information. Anyone up to the challenge? Arnie?

Anyway, that was the last thing Jane wrote, as three days later on , she passed away in that house, as she rested over Cassandra’s lap. She might be just inhaling Cassandra’s perfume and rest peacefully on the pillow on Cassandra's lap, looking at the street and trees outside… or perhaps scanning flashback images of her life… including her romance with Tom Lefroy? We would not know, eh?

I also used the house in as the background setting for my ‘Countenance So Beloved’ fan-fiction (in which our heroine received a deathbed visit from an old acquaintance from ). I did not do my research properly back then; I didn’t think to browse any pictures. But, the house in my mind was similar to this house in ; with at least one storey and a large window where Jane could see the streets outside. So, when I first saw the image of house in , I shivered, for that was the house that I imagined in my story.

I just recalled that Jane and Cassandra Austen moved from Chawton to Winchester on May 24, 1817. Coincidentally (and rather eerie for me), I started this blog site on May 24, 2007. It might be trivial, but it was rather strange to realise it... and rather scary as well.

Pic: the house where Jane resided (and took her last breath) in College St., Winchester.

I am honored by your invitation to find a secret in that poem, and I must tell you, you have already identified the secret message but don't realize its full significance!

The third, and, to me, most likely scenario, is simply that JA did then what she had been doing her ENTIRE life, which was to write an ironic joke! I.e., she DELIBERATELY created that phantom rhyme for "dead" precisely so that the clever reader would realize that was the word that should have "gone" there, and fill in the correct answer him or herself!

I imagine that she has been very busy wherever she's been the past 190 years, making up a few million more ironic jokes. ;)

Wooowwowoowooow... What did I find? The 'dead' thing? So she deliberately did that and take the last laugh? Witty old girl! :-D

How about acrostic? I don't think there is, but you know better than I am about this.

I suppose, one have to look closer to the entire When Winchester Races to find any hidden messages there. It was her last poem, after all, so she would have, I imagine, leave something there.

Thanks a lot, Arnie!

1. I just checked Tomalin's book, actually Tomalin gave credit in her footnotes to Margaret Ann Doody for making that detection and interpretation in 1993.

2. Is there any way you can make a copy of my first response in this thread and email it to me at arnieperlstein@myacc.net? I can't cut and paste it from the box that your blog program provides, and I am too lazy to retype it! ;)

So, the plot thickens a bit...

I was doing a little more checking, just curious to see if there may have been any comments on this question prior to Doody's, and I found, to my surprise, that some of the books which have included this poem show "dead" while others include "gone"---and one source claims that it was Cassandra who crossed out Jane Austen's "dead" and wrote in "gone" instead!

I will ask about this in Janeites and Austen-L, and report back whatever I find out.

Thanks for bringing this to my attention, Icha! ;)

If Cass really did that... wonder why she did that, for Jane definitely would have DIED that time. Lest she did not want to show it as premonition... but every Austens then already knew that Jane would not survive...

Thank YOU, Arnie! Pls keep me informed in this matter. If you want to post an article in your blog, let me know, so that I can make the link.

At times i wish Jane could of married Tom and lived her life with the man that she loved.But if she did would she have written more novels?would she have had kids? Dont you people every wonder what her life would have been like.

And what if maybe she decided to run away with Tom what would have happend.