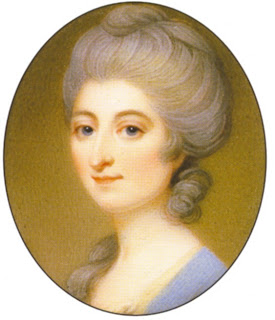 Anne Lefroy, known as Madam Lefroy, was born in 1749 to the Brydges family at Wootton Court, near Canterbury.

When George Austen was made rector at Deane by his Uncle Francis, Francis also sold his assets in Ashe to a wealthy man, Benjamin Langlois, so that ten years later in 1783, he could also reward his own nephew, the Reverand Isaac Peter George Lefroy, by giving him the living of Ashe. The very attractive and cultivated Anne married the Reverand in 1778 and they lived as Ashe, making them the Austen’s closest neighbours. They had four surviving children; the eldest Lucy and three sons; John Henry George (who succeeded his father at Ashe), Christopher Edward and Benjamin Langlois (who later married James Austen’s daughter Jane).

Anne was a keen poet and her brother, Egerton Brydges, thought highly enough of her work to get two of her poems published before her marriage. In The Poetical Register and Repository of Fugitive Poetry, there are two poems by a Miss Brydges (Spence, 2003). The poems are considered witty and contain issues suited to the feminine mind such as masculine pretension. They show that she was at ease with herself and her feelings.


Anne and Jane, despite their age difference, formed a friendship that was marked by intelligence and respect. This friendship started when the Lefroy’s invited the 11 year old Jane to play with their 7 year old daughter. Due to a mutual love of literature, Anne and Jane began long literary discussions about novels, poetry and plays. It is believed that Jane shared her writing with Anne who acted as her friend and mentor. She was given free reign of their library at the Ashe parsonage. This must have acted as a important source of self-affirmation for Jane who was a child that was of limited confidence and needed encouragement and support in her early years.


Anne was a woman of charm, intelligence and means and soon became hostess to the neighbourhood. She opened a school for the poor children of the surrounding neighbourhood and taught them to read; this shows her determination and strong will, character traits that Jane would have greatly admired. She also personally vaccinated hundreds of people in her husband’s parish against smallpox (Ray, 2006). The Lefroy’s had a carriage and Anne would often lend out the carriage to families without, such as the Austen’s. These acts of kindness led her to be named ‘Madam’ Lefroy by all who knew her.


Anne was the aunt of Tom Lefroy who came to visit them in December 1795 after recently graduating from Trinity College in Dublin. It is unclear as to the role she played or her opinion of the loving relationship forming between Tom and Jane. She did organise a ball the Friday evening (15th January 1796) before Tom was to return to London but we are unsure as to what happened at Ashe on this evening. Jane did not receive any proposal, perhaps as she was expecting, or even some kind of assurance of a continued attachment between the two lovers. It has been speculated that Madam Lefroy became aware of the relationship that was forming between her nephew and Jane and promptly packed him off back to London before any more harm could be done. If this was the situation that it can be questioned why she encouraged the friendship between them and organised this ball before he left.

Perhaps out of some kind of guilt or duty to Jane, Madam Lefroy remained very interested in her matrimonial prospects. In the winter 1797 a Reverand Samuel Blackall was invited to stay at Ashe and became acquainted with Jane. Even after he had left, letters support that Anne Lefroy reported of events at Steventon, particularly mentioning Jane. His response ‘It would give me particular pleasure to have the opportunity of improving my acquaintance with that family- with a hope of creating to myself a nearer interest. But at present I cannot indulge any expectation of it.’ Nothing was to develop between Jane and the Reverand and she heard no more about him. Although she was probably not upset over his later indifference, it is sure to have dented her pride as it would any woman’s.


Anne died prematurely in a riding accident on December 16th 1804, Jane’s 29th birthday, when she was just 55 years old. The few months following Anne’s tragic accident must have been a very difficult time for Jane as her father died a month later on January 21st 1805. Jane was mid-way through writing The Watsons which she terminated and this only serves to represent the devastation she was experiencing.


Four years later Jane wrote a poem entitled ‘To the Memory of Mrs Lefroy’ which begins with the acknowledgment that her friend died on her own birthday. She expresses her feelings towards, and opinions of ‘Madam’ Anne Lefroy’s character. Here is a poignant extract:

“I see her here with all her smiles benign
Her voice of eager love, her accents sweet;
That voice and countenance almost devine;
Expression, harmony , alike complete.

Listen: ‘tis not sound alone- ‘tis sense,
’Tis genius, taste and tenderness of soul:
‘Tis genuine warmth of heart without pretence,
And purity of mind that crowns the whole.”


The whole piece can be found at http://home.earthlink.net/~lfdean/austen/poetry/lefroy.html
Although Anne Lefroy was clearly a dedicated wife and mother, it is clear that she was a very interesting lady who had a sense of independence in her mind and spirit.

Collins, I. 1998. Jane Austen. A Parson's Daughter. Published by The Hambledon Press

The Jane Austen Center in Bath has adopted this excellent article for their Austen family/friends biography. Thanks a lot Laura Boyle of the JA Center and also to Rachel for the great bio! Here's the link.

Thanks, Rach. Hah...I didn't know Ben Lefroy's name was Benjamin Langlois... and this Jane is the 'Jane Anna Austen', I suppose?

Radovici speculated that Sir Egerton Brydges (Anne's brother) also played quite a role in terminating the relationship between Jane and Tom. I think we should also write about this bloke one day...