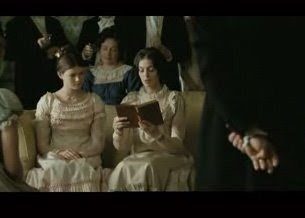 It turned out that many fans are interested with the passage read by Jane Austen (Anne Hathaway) at the end of Becoming Jane, as the older Tom Lefroy (James McAvoy) listened pensively and looked at her fondly. Many a friend knew that the passage was taken from Pride & Prejudice, but quite a few as well unsure of which part of the book it was. Here’s the entire quote of the passage, taken from Chapter 8 of Volume III. That was after Lizzy learned of Lydia-Wickham's wedding plan, but before she knew that it was Mr. Darcy who basically saved her brat sister from destitute and loss of reputation (page # depending on the book version you have):

She began now to comprehend that he was exactly the man who, in disposition and talents, would most suit her. His understanding and temper, though unlike her own, would have answered all her wishes. It was an union that must have been to the advantage of both; by her ease and liveliness, his mind might have been softened, his manners improved, and from his judgment, information, and knowledge of the world, she must have received benefit of greater importance. But no such happy marriage could now teach the admiring multitude what connubial felicity really was.

Oohh… I want to cry again… Take a look at this beautiful YouTube passage (thanks to Arya27 for the video) to refresh your memory.

I realised what passage that was when I reread PP just weeks ago. ;) Have been searching for some time.

Note how Tom is playing with his wedding band in that shot... perhaps it's just coincidence, perhaps I'm reading too much into it.

Ah, Pride and Prejudice. How can you beat that!? This scene was so sad. I'm SO GLAD you posted this text. It's beautiful, and makes me fall in love with Jane all over again. (That's what I love about her books - they're always new)

Thanks, Icha! Also, love your constant use of "brat sister".

Talking of P&P, I read an interesting essay, which I will summarise and post, hopefully today or tomorrow.

PS: Hi, Maria! Hope e/thing is going well for you and Peanut!

Glad to have you around again, and yessss... that passage is the most wanted one among BJ fans, hence I think uploading it here worths a while. Glad to do that for you girls!

I found it tough watching that clip again...gets me every time. And Maria, I think that Tom was most definitely playing with his wedding band. Such a subtle, moving touch by the film makers...but makes me blub!