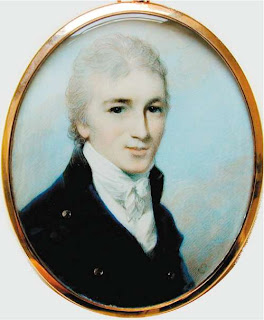 Well, his miniature portrait, to be exact! Thanks to Anielka and Jane Odiwe for their scrutiny, I found about the sale of Tom Lefroy’s miniature picture drawn by George Engleheart in 1798, and it’s on sale for GBP 50,000 now!

The sale is conducted by Judy & Brian Harden at the Grosvenor House Art and Antiques Fair on at Stand 23. This is what their site says:

We shall be offering for sale,an important piece of JANE AUSTEN'S history. A portrait miniature of her young lover Tom Lefroy by George Engleheart. The original, signed, painting, of which only one other version was made.

What are you waiting for? Any of you rich Jane/Tom fans can start bidding now. Obviously not me, though I’m a hard core fan. My cash now is not even enough to buy the frame, haha! 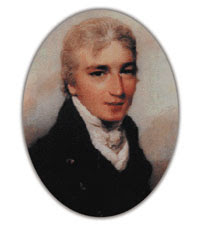 The first picture up there is the miniature portrait to be sold by the Hardens. Take a look at the picture. It’s rather different from the one we usually have on the left here, no? It’s because Engleheart only made TWO of these portraits, and the one we have on the site is the one currently held by the Lefroys in UK/Ireland. The one on sale is the second version, with rather firmer facial structures, but no less handsome. 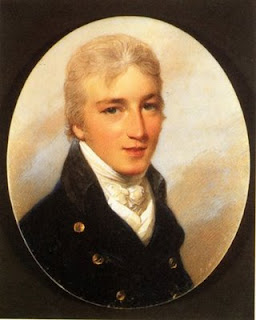 But I have to tell you, there is a third picture here that makes me confused, is this one also the portrait currently held by the Lefroys? It was available in ’s Jane Austen’s World. This picture should have been the one held by the Lefroys, but somewhat still differs slightly. Perhaps the lighting.

The watercolour, which is painted on ivory and measures just 3 inches by 1 ¼ inches, is on display at the Grosvenor House Art and Antiques Fair, at in , from Thursday. It is by Engleheart, the great English miniaturist, and the only one which is dated and signed with the artist's distinctive cursive E. The other portrait remains in the hands of Lefroy's descendants.

Brian Harden, one half of the Gloucestershire-based specialist dealers Judy and Brian Harden, who are selling the painting, said: "We bought this at auction quite a long time ago and it's been in our private collection since that time. We didn't know whom Tom Lefroy was when we bought it – it went through the auction house unrecognised – but we were able to identify and discover the history of the sitter. It's a very fine piece. The sitter is very handsome and personable. It was painted just two years after he met Jane Austen."

Anyone up to the bidding, just let us know. Meanwhile, we will keep monitoring the sale and report back to you for the final result.

Pic 2. The other version of Tom Lefroy’s miniature portrait kept by the Lefroy descendents (picture courtesy of Edward Lefroy)

Pic 3. Tom Lefroy’s portrait from ’s ‘Jane Austen’s World’. It should be the same with the one kept by the Lefroys.

Good God, Willoughby! Mimi, you are so right! Yes, Darcy and Bingley stayed in Grosvenor Square while they were in London. What a coincidence!

I think the miniature that the Lefroys own and the one that appears in Maggie Lane's book is the same. Perhaps you think is different but only because of the quality of the photographies, not because they are different portraits.

Could someone let us know if it sells? It might appear in the English newspapers.

Ha, yeah, perhaps you're right, Anon (is that you Linda?), I think the qualities of the photographs. Thanks.

I have just had a good search on some of the english news websites and there is nothing as yet, simply stories related to the looming sale. I will keep looking in the next few days.