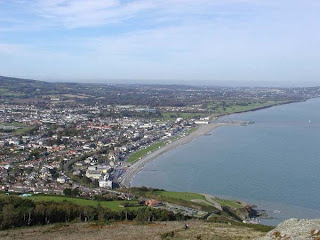 As soon as I realised that Becoming Jane was filmed in, among others, and that Tom Lefroy loved Co Wicklow so much, I searched for more info about it. It turned out that Tom indeed spent the last three years of his life in Newcourt, off the town of Bray from 1866 to 1869. And guess where in Bray Becoming Jane was filmed? Killruddery House in Bray. I talked a bit about it in the previous post about Henry Austen, and I want to elaborate it now.

Ardmore Studios, ’s only dedicated film studio that managed the filming of Becoming Jane, is also located in Bray. The filming was done in Killruddery House, which was about 1.5 miles away from the studio in . I am not sure what scenes were shot in Killruddery, though. 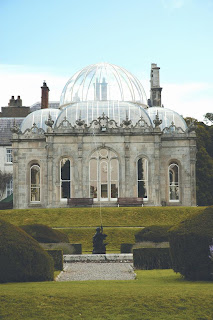 I also learn from the Memoir of Chief Justice Lefroy that the old Tom Lefroy spent his last three years in Newcourt, Bray, and there is no evidence that Julian Jarrold &c were aware of this fact. Don’t get me wrong, I don’t criticize them here. In fact, I find the coincidence very very interesting.

‘For some years previous to his death, he found that in the air of Bray he was less subject to the bronchial attacks from which he occasionally suffered than in Longford, and after his retirement from the Bench, he seldom spent any length of time at his own country seat. In 1866 he rented the pretty villa of Newcourt, near Bray, where he resided up to his death on . It seems to have been the revival of an early taste, for we find a letter written to his father in the year 1819, dated from Newcourt, Bray; so that when a member of the Bar, he must have passed one of his vacations there.’

Tom Lefroy resigned from his position as the Chief Justice of Ireland after July 11, 1866 (a new Chief Justice, the Right Hon. James Whtieside took his seat on ). It is possible that after his resignation, Tom rented the villa in Newcourt. At that time, Bray was already famous as a seaside resort for health retreat, not unlike in the (though was not a coastal town).

Rachel and I tried to locate which house in Newcourt he rented in 1866, but we have not succeeded. Either someone from has to send us any ancient blueprints and records, or the villa was already demolished. But there are and now, thus I think Newcourt is either a suburb or a neighbourhood (in Lefroy’s time, it would be a small village off Bray). Either way, I created this map below to show the distance between Newcourt, Ardmore Studios () and Killruddery House. 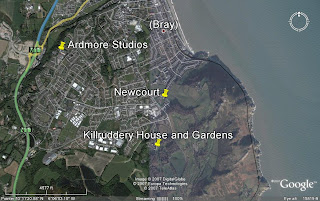 From the map (click the map to enlarge), we can see Ardmore Studios (on of Bray) that organised the shooting, Newcourt suburb/neighbourhood and Killruddery House. In the present day, we have and – there off the beach, nearby the greeneries. In the olden days, the road might be just a pathway to one or two villas; one of them the villa Tom Lefroy rented in 1866 (also the villa where he died on ). In fact, the olden day Newcourt might be a village then. The three sites (, Newcourt and Killruddery) are within 1.5 miles (approx 2 km) distance to each other. In fact, Killruddery House was less than one mile away from the modern . Practically a neighbour! 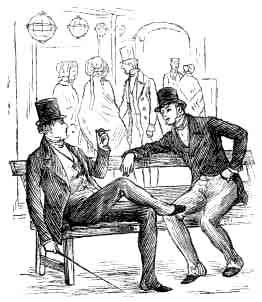 I bet the old Tom Lefroy, when he was fit enough, often rode the countryside of Bray municipality, even passing through the woods that would later be the . He would definitely pass by Killruddery House, which had belonged to the Brabazon Family (the Earls of Meath) since 1618. I tried to find out if Tom Lefroy knew Earl of Meath during his life time, but I have yet found such information. However, since Tom was after all the former Chief Justice of Ireland, I bet he received many invitations from great houses in Bray, including Killruddery.

Tom Lefroy would then either join the Meaths’ dinner, or just sipping the afternoon tea with Lord Meath, in the very mansion the casts and crew of Becoming Jane made the movie two centuries later. They would talk of the old days, how fine the day was, or of Scriptures. Tom would then wander the woods of Newcourt and the gardens of Killruddery with his daughter Jane, and their steps would be traced back by Anne Hathaway and James McAvoy much later on in March/April 2006.

Pic 1: Bray seafront from the hilltop

Pic 4: A sketch from 'Two Days in Wicklow'

Very nice. I had not heard of Bray before, so I enjoyed the journey you took me through. I am also learning so much about Tom that I never knew before.

Thanks, Ms Place. And thanks for Linda for pointing out that we should 'Click' the map and not 'Lick' the map! LOL!