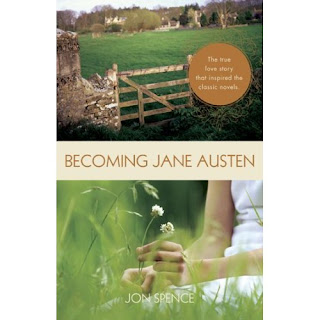 Okay, so I’m still shaking here, for I have just received my Becoming Jane Austen by Jon Spence. I’ve waited so long for this book, and when it arrives, I almost can’t believe it. Unfortunately, it didn’t arrive with Anne Newgarden’s Becoming Jane: The Wit and Wisdoms of Jane Austen. But that does not matter. Plenty of time to wait.

Now, I just want to write my first impression of Spence’s book. First, I am so glad that the cover is different from the first edition (2003), which had Cassandra’s watercolour portrait of Jane Austen. Instead, the cover is faithful to Becoming Jane the movie, with cream horizontal bar in the middle and saffron fonts. There is a young woman sitting on a meadow, and I can only imagine her to be Anne Hathaway as Jane Austen. The back cover is saffron as well, very nice colour.

I scanned the book immediately, hoping to find some pictures. To my dismay, no pictures at all, though there is a list of illustrations (referring to plates between pages 144 and 145; which does not exist). I sincerely hope the fault is only for my copy. This last three months, I have read at least ten books of Jane Austen; some of them have illustrations that should be included in Spence’s book as well. But I imagine this lack of illustrations would be a great disappointment to readers that never read JA-related books beforehand.

I jumped directly to reference, and found that there was no mentioning of Radovici’s A Youthful Love (1995) or Thomas Lefroy’s Memoir of Chief Justice Lefroy (1871). No wonder one of the purist Austenites launched a great protest on this book, particularly for not mentioning Lefroy’s Memoir. Interestingly, as have been suggested by the detective works we have done in this blog, Radovici’s and Lefroy’s books will actually support the idea that, not only Jane Austen ever forgot Tom Lefroy for the rest of her life; Tom Lefroy could not forget her either. Yes, the impressions will jump on you as you scrutinise Lefroy’s Memoir. 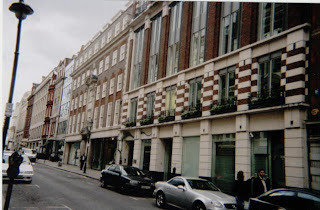 Other than that, the book provided me the famous fact on . I’m sorry again that I cannot see the picture of the old (as supposedly inserted in the book), but Spence’s explanations were comprehensive. Spence also talked of Jane Austen’s books, and how she actually inserted Tom Lefroy here and there. I’m telling you, it might need a bit of detective work to decode Jane’s messages, but I believe it’s all there in her novels, as Radovici also suggested in 1995.

Suggestion? Buy the book. It might be painful to find that the plates of illustrations are missing (I so hope it’s only in my case), but nonetheless, it has so many important analysis about Jane Austen and Tom Lefroy. Rachel had actually posted Spence’s points of thoughts here in the earlier days of this blog (when no one knew what Becoming Jane Fansite was about - compared to now, when we have several good friends around here!).

I will close this review with an excerpt of what Jon Spence said in the Introduction to second edition about Becoming Jane the movie and Anne Hathaway’s role as Jane Austen.

‘The scriptwriters of Becoming Jane have imagined what might have happened during this time. Although the plot and incidents of film are fictional, the writers have striven to give us a true picture of Jane Austen’s character, personal circumstances and social context. The ‘story’ of Jane and Tom’s romance may not have played out in the way the writers have imagined, but the film is, I believe, true to the spirit of Jane Austen’s character and to the forces that came into play at that time in her life.

As a biographer, I welcome the film Becoming Jane for another reason: It allows us to see the young Jane Austen. Some will argue – have already argued – that Anne Hathaway doesn’t look like Jane Austen. But then, do we know what Jane Austen looked like? The only visual likeliness we have agreed to call Jane Austen is the sketch Cassandra drew of her in about 1810 when Jane was in her mid-thirties. The picture is problematical.
…
The film Becoming Jane has given us an image of Jane Austen that liberates our imagination. I envy readers of my book who come to it with Anne Hathaway’s image of Jane in their mind’s eye. You will not have to struggle against the image Cassandra created to see the Jane Austen who was young and pretty, lively and in love. Anne Hathaway’s skilful portrayal of Jane Austen in Becoming Jane shows that art can have as much power to bring us closer to the truth as facts themselves can.’

Fantastic! Forgive me if this post appears on another entry as I am getting used to posting here. xo

I am quite addicted to this blog. I have read all of JA's books and now find myself evermore passionate about this particular topic.

I just cannot imagine our Jane would be an ugly spinster without the experience of love and etc., when she wrote those novels!

As a novice in this area I was wondering if any of the experts here can recommend a reading list for me?

Any help is very much appreciated!

Thanks kdesign! Glad this website helps! And yes, Jane Austen was definitely NOT an ugly spinster.

For reading list, you ask for it, my dear...

Chapman, R. W. 1979, Jane Austen's Letters to Her Sister Cassandra and Others, Oxford. (or get Le Faye's)

Get it in your library, perhaps they have microfilms of it. If not, send me an email, for I have the copy. But try the library first, for the files are bloody big.

Thank you so much!!