The House on Henrietta Street, Dublin 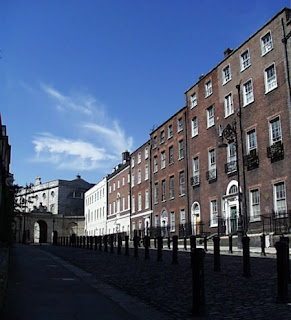 Throughout our journey in building the Becoming Jane Fansite, Rachel and I found many coincidences that, as they were too many of them, do not look like real coincidences. Linda also keeps delivering me documents that support the non-coincidences of some facts. It’s just spooky. Eve Stewart, the Becoming Jane production designer, also found such ‘coincidence’ during her hunt for a Georgian house in that would serve as the house of Mrs. Ann Radcliffe. This is the quote from the production notes of the U.S. Official Site:

For Stewart, perhaps the most satisfying find of all was the house on , which doubled up for the residence of the authoress Ann Radcliffe, where fate seemed to have led the production. “In a court room on , we came across Tom Lefroy’s name on a stained glass window,” she recalls. “It was quite a spooky discovery.”

Spooky indeed. I mean, if you find Tom’s name on a court document, that is not surprising, for he was the Chief Justice of Ireland anyway. But on a stained glass window? Brrr…Just FYI, Tom Lefroy often resided at Leeson Street while staying in Dublin (Memoir of Chief Justice Lefroy). That's about 1.5 miles away from Henrietta Street, southeasterly.

By the way, in is indeed famous for her Georgian buildings. This is what Irish Architecture.com says:

dates from the 1720s and was laid out by Luke Gardiner as his first venture. Gardiner, more than any other individual was responsible for turning into an elegant Georgian city. Named after Henrietta, Duchess of Grafton it is a dead-end terminated by the Law Society’s Kings Inns and was designed an as enclave of prestigious houses. The street is still cobbled but many of the fine houses are now in disrepair.

In the mid 1700s, the street was inhabited by five peers, a peeress, a peer's son, a judge, a member of parliament, a Bishop and two wealthy clergymen as well as Luke Gardiner himself. At the top end of the street next to the Kings Inns is the Law Library designed by Frederick Darley in 1827. This replaced three of the oldest houses on the street. A proposal by Abercrombie for a National Cathedral in this area would have meant the demolition of the street with the Kings Inns forming one side of a large piazza.