Susanna: the fair lady of Babylon 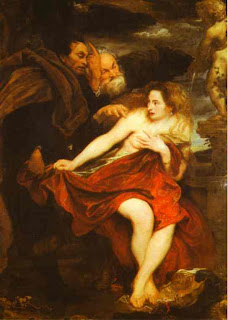 My recent post about Tom Lefroy taken from the book ‘From to ’ mentioned that in addition to several ‘profligate’ dances, Jane Austen and Tom Lefroy shared some singing and piano sessions as well. One of the songs they apparently shared was Georg Friedrich Handel’s arias from his 1749 oratorio ‘Susanna’ (FYI, oratorio is similar to opera, but strictly concert, as opposed to the theatrical nature of opera). Susanna is a story during the ancient time of the Old Testament, describing the attempted rape of the virtuous Susanna of Babylon, wife of Joachim, by two hypocritical Elders; and her eventual salvation, aided by the young prophet Daniel. There is a good review about this oratorio, including its social and religious significance.

I have not obtained Helen Ashton’s Parson Austen’s Daughter, but I hope that my interlibrary loan will get the book for me soon. Thus, I have not been able to verify if the reference of Jane and Tom playing piano and singing together was based on Ashton’s book or the diary of Gerald de Courcy Lefroy. Nonetheless, Jane Austen had left some music books, which would then be transformed into several music CDs by Austen fans, e.g. Thomas Carter’s Jane’s Hand: the Jane Austen Songbook and John Ostendorf’s Jane Austen Songbook.

Jane’s Hand contains an aria from Susanna Act II Scene 2 (Ask if yon damask rose be sweet) and an aria from Susanna Act III Scene 1 (Chastity, thou cherub bright). The Damask Rose (Carter’s CD) has similar tones with The Irishman (in Ostendorf’s CD); the latter has inspired the Bond Street Airs score in Becoming Jane OST. Damask Rose is actually taken from the libretto of Susanna’s attendant:

Ask if yon damask rose be sweet,
That scents the ambient air;
Then ask each shepherd that you meet
If dear Susanna's fair.
Say, will the vulture leave his prey,
And warble through the grove?
Bid wanton linnet quit the spray,
Then doubt the shepherd's love.
The spoils of war let heroes share,
Let pride in splendour shine;
Ye bards, unenvy'd laurels wear:
Be fair Susanna mine.

As ‘From Ireland’ mentioned that Jane and Tom sang together arias and several Scottish and Irish popular numbers, it is very likely that the speculations that Tom Lefroy has given Jane at least a songbook, particularly the one that contains The Irishman, is plausible.

Pic: Susanna and the Elders by Anthony van Dyck

Icha, I have Ashton's book, and it does present Tom and Jane as singing duets with Jane, with her playing the piano. The titles Ashton suggests are :

"How sweet is the woodlands", a hunting song,

"Ask if the damask rose be sweet", from Handel's Susannah,

"How Gentle was my Damon's Air", a lament,

songs by Arne and Dibdin,

a book of canzonets for 2 voices by Mr. Jackson of Exeter,

"I hae laid a herring in saut", "The Yellow Haired Laddie", and "Robin Adair", that last supposedly being his favorite.

Really?! Gosh. I have to wait for my library to deliver the book to me. I've spent too much $ on JA books now, the last one being 'Visitation of Ireland' to see TL's pedigree!

But thanks a LOT for your info, Arnie. Much appreciated!