Jane Odiwe (thanks, Jane!) directed me again to the poem of Ruyard Kipling (1865-1936) titled ‘Jane’s Marriage’. Kipling might be one of the first people who understood Jane’s longing for the love of her own. He also detected a subtle autobiographical story of Jane Austen herself in Persuasion. Here’s the poem, taken from the Jane Austen Centre. Thank you, Kipling, for remembering Jane in such a beautiful way.

Jane went to :
That was only fair.
Good Sir Walter met her first,
And led her up the stair.
Henry and Tobias,
And Miguel of Spain,
Stood with Shakespeare at the top
To welcome Jane --

Then the Three Archangels
Offered out of hand,
Anything in Heaven's gift
That she might command.
Azrael's eyes upon her,
Raphael's wings above, 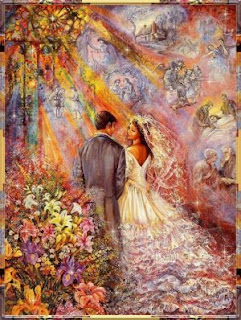 Instantly the understanding Seraphim
Laid their fingers on their lips
And went to look for him.
Stole across the Zodiac,
Harnessed Charles's Wain,
And whispered round the Nebulae
"Who loved Jane?"

In a private limbo
Where none had thought to look,
Sat a Hampshire gentleman
Reading of a book.
It was called Persuasion,
And it told the plain
Story of the love between
Him and Jane.

He heard the question
Circle Heaven through --
Closed the book and answered:
"I did -- and do!"
Quietly but speedily
(As Captain Wentworth moved)
Entered into
The man Jane loved! 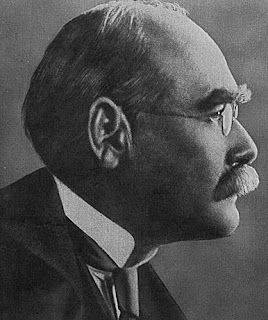 The following is the epitaph of the opening of Kipling’s story ‘The Janeites’.

Jane lies in -- blessed be her shade!
Praise the Lord for making her, and her for all she made!
And while the stones of , or , remain,
Glory, love, and honour unto 's Jane!

Hmmm...Kipling also thought that Milsom Street was rather important for Jane. Anyway, back to the first poem: is it not touching?

In a private limbo
Where none had thought to look,
Sat a Hampshire gentleman
Reading of a book.
It was called Persuasion,
And it told the plain
Story of the love between
Him and Jane.

I don’t know, will never know perhaps, if Kipling was aware of the failed love story between Jane and Tom Lefroy. The Memoir of Jane Austen had been published by the time Kipling was a teenager. As the Memoir only brushed a very bit of Tom Lefroy, Kipling might not see it. But, even if he did not, he guessed it almost right. Having visited Hampshire several times, the Irish Tom Lefroy could be called ‘a Hampshire gentleman’ as well…

Pic 1: A close up of Revd. Clarke’s sketch of Jane Austen

Pic 2: The Wedding, by scubagrl.net