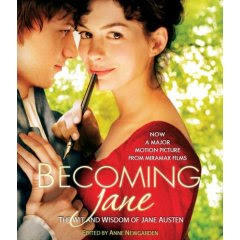 I received my copy of Becoming Jane: The wit and wisdom of Jane Austen by Anne Newgarden a few days ago so I thought I should follow Icha’s lead and also write about my first impressions.

I think that this is an adorable little book that all Jane Austen fans should own. It is small and compact so can be carried around with ease- I certainly have.

I love the cover and it captures the temperament of Jane (Anne) and Tom (James) exactly to my liking. There is a look in his eyes of sheer adoration and her dazzling expression of wit but contentment.
The book is separated into fifteen chapters;
Family, Juvenilia, Beauty and Fashion, Vanity, Other People, Friendship, The Sexes, Courtship, Love, Marriage, Money, Letters, Books and Reading, Her Own Writing, Becoming Jane.
Each of these chapters contains a selection of quotes taken directly from the mind of Jane Austen either through one of her novels or from the many letters that she wrote to her beloved sister or other family and friends.
I thought that I would present a selection of my favourite which will hopefully encourage you all to seek this book for more.

Family
“It is very unfair to judge anybody’s conduct, without an intimate knowledge of their situation. Nobody, who has not been in the interior of a family, can say what the difficulties of any individual of that family may be.”
- Emma Woodhouse to Mr Knightley, in Emma.

Juvenilia
“We are handsome, my dear Charlotte, very handsome and the greatest of our Perfections is, that we are entirely insensible of them ourselves.”
- From Lesley Castle: An unfinished Novel in Letters. 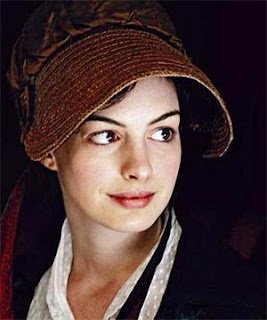 Beauty and Fashion
“Next week [I] shall begin my operations on my hat, on which You know my principal hopes of happiness depend.”
- From a letter to her sister Cassandra (Oct 27-28 1798)

Vanity
“Selfishness must always be forgiven, you know, because there is no hope of a cure.”
- Mary Crawford, in Mansfield Park

Friendship
“There was a kind of cold-hearted selfishness on both sides, which mutually attracted them; and they sympathises with each other in an insipid propriety of demeanor, and a general want of understanding.”
- On Lady Middleton and Mrs Dashwood in Sense and Sensibility

The Sexes
“As far as I have had the opportunity of judging, it appears to me that the usual style of letter-writing among women is faultless, except in three particulars.”
“And what are they?”
“A general deficiency of subject, a total inattention to stops, and a very frequent ignorance of grammar.”
- Catherine Morland and Henry Tilney, in Northanger Abbey 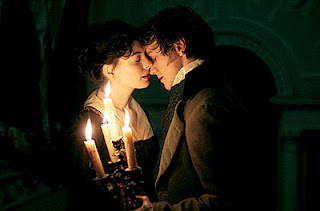 “Let no one presume to give the feelings of a young woman on receiving the assurance of that affection on which she scarcely allowed herself to entertain a hope.”
- On Fanny Price, in love with Edmund Bertram, in Mansfield Park

Marriage
“I consider everybody as having the right to marry once in their Lives for Love, if they can….”
- From a letter to her sister, Cassandra (Dec 27-28 1808) 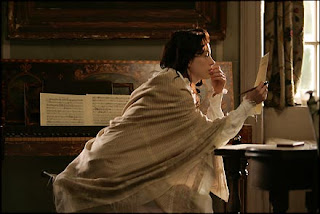 Becoming Jane
“I always deserve the best treatment, because I never put up with any other….”
- Emma Woodhouse, in Emma

“I will not say that your Mulberry trees are dead, but I am afraid that they are not alive.”
- From a letter to her sister, Cassandra (May 31, 1811)

“One cannot always be laughing at a man without now and then stumbling on something witty.”
- Elizabeth Bennet, in Pride and Prejudice

Thank you Anne for such a treat!

“Next week [I] shall begin my operations on my hat, on which You know my principal hopes of happiness depend.”

LOL! Was she not so WITTY?! I remember reading Spence's book that also talked of one of Jane's letter, in which she talked in details about trivial things, such as ordering two tables, ending it with 'They [the tables] send their best Love' to Cass :-D

one of my favorites from that book is the cousin comment.

'Cousin,
Conscious of the Charming Character which in every Country, & every Clime in Christendom is Cried, Concerning you, with Caution & Care I Commend to your Charitable Criticism this Clever Collection of Curious Comments, which have been Carefully Culled, Collected & Classed by your Comical Cousin '

she is a master of alliteration! hehe.

Oh, yes! I totally agree that Jane is the master of alliteration! And she can write a page-long paragraph when she's describing a chatty character, like eternal talkers Mrs. Jennings and Miss Bates.