Lindafern of the Dregston/Potter message board has supplied me with the precious copy of Memoir of Chief Justice Lefroy, written by Thomas Lefroy (the old Tom Lefroy’s son) in 1871. Linda obtained the copy from , hence I thank both of them for the very valuable files. Now, in this first post obtained from the Memoir, I would like to draw your attentions to the filming location of Becoming Jane (i.e. County Wicklow, in addition to . Thanks to Rachel for pointing out the location of BJ filming in for me, by the way.) 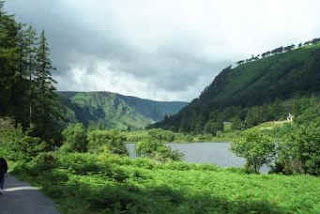 In my previous post re: the location, I reported that BJ was shot in Ireland mostly because the modern Hampshire in was now too tidily groomed that the sense of rustic originality was not available there. I definitely do not object the rationales behind the location selection, and I’m sure Julian Jarrold &c thought of it in a realistic and cinematography point of view. I also think that County Wicklow made a lovely Hampshire in the movie. But after reading the Memoir, I (who personally believed that everything in this world is connected to each other) found another interesting thing about that connects itself to Hampshire in . Ready?

In July 1812, Tom Lefroy wrote a letter to his wife Mrs. Mary Paul Lefroy from . I will deal with Tom’s love to Mary in another post one day (I tend to believe that he did love her as well… though of course I fancy the thought that he could not forget Jane entirely). The following is the excerpt from the Memoir (p. 37):

I arrived here yesterday about from Kilkenny where I completed all my business. It rained in the night, but the day took up about ; and so fresh was the air, so lively and beautiful all the scene from Kilkenny to Ballyeheale, that I was quite in a “Wicklow trance” all the way. To see the blessings of heaven so profusely poured out as far as the eye could reach without a single damaged ear of corn after the threatened danger of a famine, with the sun suddenly breaking out and enlivening the whole scene, made me exclaim as I reached the top of one of those fine hills, How excellent are Thy works, O Lord; in wisdom hast Thou made them all.

Man... was he not a poet, that Tom Lefroy? Anyway, according to the younger Thomas Lefroy, ‘Wicklow trance’ was a ‘household word in our family circle from the great admiration he had for the scenery of the where for many years he spent his summer vacations’.

Okay. There is no evidence that Jane Austen ever stepped her foot on , let alone traveling to Wicklow. That’s not my point either. My point is that it was such a ‘coincidence’ that the ‘Hampshire’ location of Becoming Jane was shot in County Wicklow in Ireland, the very place Tom Lefroy loved to spend his summer time. It was very unlikely that Hampshire and Wicklow were related in Austenian world, with the exception of in Becoming Jane… and in Tom Lefroy’s very own letter.

If the modern day filmmakers of Becoming Jane felt that has similar ambience with the olden days Hampshire, was it not possible for Tom Lefroy... to think of the same thing? Subconsciously, at least?

Is my spelling of ‘Divine intervention’ correct? :-D

It is a romantic suggestion that Tom Lefroy experienced some deja vu recollection of Jane Austen while traveling through County Wicklow, but if the choice of Wicklow as a location was not a coincidence, my guess is that it had a simpler and less romantic explanation--i.e., that the filmmakers were aware of exactly that same Lefroy family factoid as you found!

But I enjoy your imaginative leap nonetheless, and encourage you to keep seeing "la vie en rose" in these factoids, because you really never know when that will turn out to be exactly the RIGHT way to look at one of them. Like Spence with the staying with Langlois in London.

Could be, Arnie, it could be that the filmmakers also found out the factoid that I found. BUT, they never mentioned it in any interviews ever (and Rachel & I have been scouring down any news JA related). We could miss that fact for sure (duh!), but so far there is no evidence that BJ makers were aware of that fact. They only said it was because Hampshire was too neatly groomed and would not represent the Hampshire in JA's time.

Still, very nice devil's advocate you had there (no pun intended...heheh!). Thanks so much for the read and review, mate!