Jane Austen Quote of the Week 145 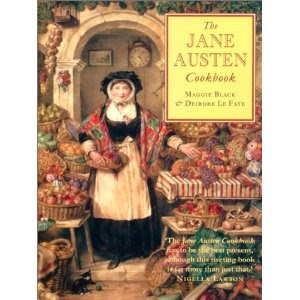 This weekend’s quote was taken from Jane Austen’s letter in 1808 which was written for Cassandra Austen. It was a simple, no-brainer quote that I searched for because today I just tried a new green tea cake recipe. I am pleased to report that the cake did not disappoint me, although a slightly more moist texture would be preferable. The quote was directly taken from Pemberley.com.

Your account of Anna gives me pleasure. Tell her, with my love, that I like her for liking the quay. Mrs. J. A. seems rather surprised at the Maitlands drinking tea with you, but that does not prevent my approving it. I hope you had not a disagreeable evening with Miss Austen and her niece. You know how interesting the purchase of a sponge-cake is to me.

Since it seems to be the season for birthdays, I thought a quote from our own Tom Lefroy in “The Memoir of Chief Justice Lefroy” about his ninetieth birthday might be appropriate to celebrate Icha’s birthday today even though I am fairly certain that she is not 90.

My Dearest Jeffry, - I have just received the congratulations of yourself, and your dear 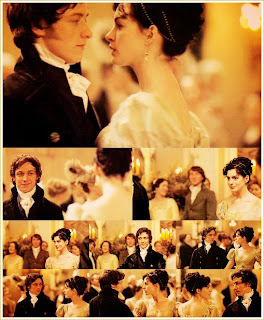 companions on God’s wonderful mercy in permitting me to see the ninetieth anniversary of my birth-day. It fills my heart with joy and thankfulness of no ordinary degree, when I find those I love ascribing praise for all our family mercies, to Him to whom all praise is due. I think I cannot do better in return than pray that the blessing which old Jacob gave to his loved son Joseph, may rest on my dear Jeffry, and his no less dear wife, who may well claim to be “a fruitful bough, and even a fruitful bough by a well.”

“May the God of thy fathers keep thee, may He bless thee with the blessings of heaven above, and bless thy progeny to the utmost bounds of the Everlasting Hills.” With fondest love from all the dear ones around me to you and yours, T.L.

I have to say that I admire his Godly expressions. They remind me of what I want to believe he discovered from our dear Jane at their ‘encounters’ at the dances. My beliefs are based on his notes at the beginning of the Memoir which I have quoted before. I especially want to wish our Icha the same blessing: “May the God of thy fathers keep thee, may He bless thee with the blessings of heaven above, and bless thy progeny to the utmost bounds of the Everlasting Hills.”

Happy Birthday, dear Icha from Team Jane. And I send Love from Linda the Librarian 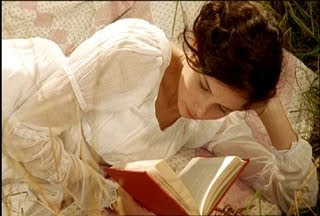 In light of Icha's quote last week and the fact that it was International Women's Day last tuesday (8th March 2011), I would like to use a related quote from Northanger Abbey. This quote has been mentioned before on the blog when we wrote a review of Anne Newgarden's book The wit and wisdom of Jane Austen but not in the context of quote of the week.


This is taken from a conversation between Henry Tilney and Catherine Morland:

Henry: “As far as I have had the opportunity of judging, it appears to me that the usual style of letter-writing among women is faultless, except in three particulars.”

Catherine: “And what are they?”

Henry: “A general deficiency of subject, a total inattention to stops, and a very frequent ignorance of grammar.”

I shudder at the thought of the gender discrimination Jane Austen must have faced when she revealed herself as a 'female' authoress.
Icha commented in last weeks quote about how the wonderful gift of education is now offered to many more women in the world with each passing year. Things have come so so far in the 200 years since Jane Austen's time but lets hope that they can go further, and a time will come when men and women are truly viewed equally by all.

Pic: Felicity Jones as Catherine Morland from The Lit Connection

Jane Austen Quote of the Week 143 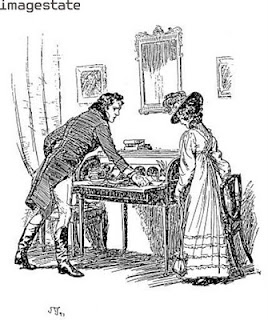 This week’s quote is taken from Persuasion, chapter 23 on the conversation between Capt Harville and Anne Elliot (Wentworth was writing THE love letter to Anne in the same room).

Capt Harville: “But let me observe that all histories are against you -- all stories, prose and verse. If I had such a memory as Benwick, I could bring you fifty quotations in a moment on my side the argument, and I do not think I ever opened a book in my life which had not something to say upon woman's inconstancy. Songs and proverbs, all talk of woman's fickleness. But perhaps, you will say, these were all written by men.”

Anne Elliot: “Perhaps I shall. Yes, yes, if you please, no reference to examples in books. Men have had every advantage of us in telling their own story. Education has been theirs in so much higher a degree; the pen has been in their hands. I will not allow books to prove anything.”

Two centuries have passed by since Miss Austen’s era, and so many had changed in the way education is conducted in many countries. Many women now have the same chance of enjoying education like men, such that I have nothing but utter gratitude for my luxury. However, at the same time, in many places too remote culturally, emotionally or geographically from where I am now, so many women are still without proper access to education, and if they do, they might have to do that in fear that it will be cut short one way or another, usually from the lack of fund in the family (forcing the parents to choose only the boys in the family to go to school and leave the girls to help in the kitchen) or from the lack of security (Afghanistan is an example popping into my mind now, but not the only one for sure).

So here’s to the hope that one day, sooner than later, any girls and boys in every spot in this planet will have equal opportunities to enjoy education and hence better their lives.

Pic: Art by Hugh Thompson on the scene where Wentworth gave Anne his love declaration letter, from Heritage Image. The conversation between Anne and Harville took place before this scene.

Sorry for the belated posting; I was a bit under the weather last week (and Maria sent it on 27 Feb!). But thanks a lot Maria! 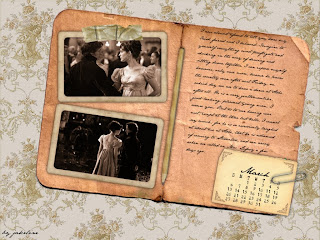