I’ve been missing James McAvoy so much, so here’s another copy from the U.S. Official Site about ‘Becoming Tom’, from the Production Notes (under ‘About the Film’). Gosh, I miss James’ Tom... 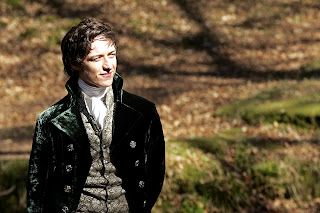 When Jane Austen falls in love in BECOMING JANE, it is with the consummate Austen-style rogue, a wily young rake with both ambitions and notions. This is Tom Lefroy, about whose personality little is known, so the writers drew both on Austen's male characters and one fact that Lefroy's favorite book was Henry Fielding's comic novel Tom Jones, about a vigorously lusty yet kind-hearted young man, similar to the character Tom Jones himself to create a portrait of a man well aware of the powers of his charisma.

To play him, the filmmaker sought someone who had not been seen in this kind of role before, a modern, sexy, young leading man who could bring something new to the portrait. Julian Jarrold was soon put in mind of rising Scottish star James McAvoy, having directed in him in the British television series "White Teeth," well before McAvoy came to the attention of playing the naive and youthful doctor who becomes personal physician to Forest Whittaker's Idi Amin in THE LAST KING OF SCOTLAND. 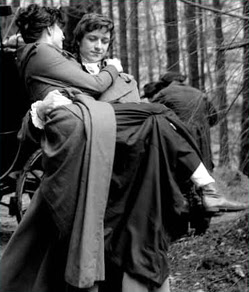 McAvoy was equally keen to work with Jarrold again. "With a lesser director, the film could have become some kind of parallel Pride and Prejudice but Julian made sure that did not happen," he says. "I've wanted to work with him again for years. He's got impeccable taste and elevates an ordinary film into an extraordinary one. He has expertly teased out the romance at the center of BECOMING JANE."

As he learned more about Tom Lefroy's high-stakes position as a young man with his family's hopes pinned on him, McAvoy developed empathy for his character's wild ways in the seedy gentleman's clubs of . "Tom is under a lot of pressure," says McAvoy. "His job, as the eldest son, is to revive his family's ailing fortunes. He has been aware of that duty since the age of eleven or twelve. His Uncle Langlois took him away from his family and friends at an early age to train in law in . It was an opportunity to elevate himself, marry well and, although he is a true non-conformist at heart, he does feel the weight of that responsibility on his shoulders. So he is a conflicted person and when you are experiencing that kind of conflict you do strange things." McAvoy continues: "Through his teenage years and early twenties, Lefroy goes off the rails a bit, but then he meets Jane. They are both non-conformists and I think recognize a kindred spirit in each other. Then, in our film, they fall in love."

As much as it is about becoming Jane, the film is also about Tom becoming a man of his times, facing the tragic reality that love must take a back seat to forging one's fortunes and keeping one's family commitments. "The interesting thing is that later in life Tom would conform completely, while Jane becomes a brilliant non-conformist, writing in a revolutionary way," observes McAvoy.

McAvoy knew his portrait of Tom could only come alive with the right Jane, and he found Anne Hathaway almost supernaturally suited for the part. “I don’t think we could have chosen anyone better to play Jane Austen,” he says.

Thank you!
I think his insights into the story are terrific and the male-point-of-view is refreshing, especially because we don't often get that prespective. xo

I completely agree with you. Am loving that new pic! Tom/James looks adorable!

Yup... that black/white picture is a treasure, eh? I really really love that moment... SOB-SOB! (watch out Kari, you'll need lots of Kleenex...)

Oh, yeah, really a catharsis. I watched it four times (the 3rd and 4th really to remember the lines for fan-fiction purposes)... and I remember the 1st and the 2nd one I came out of the cinema with puffed eyes... as if my dearest beloved significant other has deserted me or something like that...

When is your viewing? Did you get the ticket for the first screening?

I'm in NYC which is lovely for movie openings because we generally get them before many other states. My screening is Tuesday night and my cousin and I are very excited.
Unfortunately my friends and relatives scattered about will have to wait till the 10th.
I have so many ladies eager to hear how it is!

Oh, pray tell us what you think of it as soon as you can wipe out the run-off mascara then? Or better, just go mascara-free :-D

And enjoy the musics as well, particularly the ball where Jane wears the green dress. So far, I have yet located any classical music CD with that track!

I cannot wait to give my thoughts on the film!
It's interesting as I already know quite a bit about it, but being able to watch the story unfold onscreen will be wonderful. Not too mention the "clues" you have been giving me - i'm so curious!

Good luck on your quest for the music. ; )