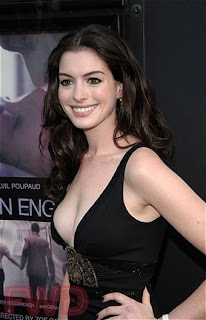 From the Fashion Wire Daily, one of the first reports of the New York Premiere of Becoming Jane. I'm a bit low that James McAvoy did not attend the premiere... but I hope, if ever the movie gets any Oscar nominations, he will...

As Anne Hathaway walked the red carpet on Tuesday night in New York at the premiere of "Becoming Jane," her latest film that chronicles Jane Austen's rise to fame and fortune as an author in the late 1700's, she looked fresh and fabulous. At 24, Hathaway is already at the top of her chosen career, with a string of movie hits behind her, including "The Princess Diaries," "Brokeback Mountain," and "The Devil Wears Prada." It's a life that differs dramatically from that of Jane Austen, who didn't find fame and success with her novels until she was in her mid-thirties.

But that didn't stop Hathaway from identifying with Austen, once she explored more about the author, whose novels "Sense and Sensibility," "Pride and Prejudice," "Mansfield Park," and "Emma" continue to be read and loved to this day.

"I was ashamed when I read the script that I'd never been more curious about her life, actually," Hathaway revealed at an earlier press day for the film. "I just assumed that I knew her because of [reading] her work. I accepted the two-line biography: ‘Jane Austen lived 41 years, published five novels, never married.'"

But in making "Becoming Jane," and exploring the story of Austen's early romance with Tom Lefroy (played by James McAvoy), Hathaway discovered much more about the woman behind the novels.

"I inherited the image of Jane Austen as a sort of a dried-out old spinster. And in doing my research I found she was anything but that. She was wonderfully alive, very fun, a bit naughty and so much, so much more alive than I'd ever thought. And so it was wonderful, the idea of playing the woman before the icon."

Hathaway, who attended the premiere at the Landmark Sunshine Cinema and after party at the Bowery Hotel with her long-time boyfriend Raffaello Follieri, seems to be blessed with everything a modern woman could possibly desire – career, financial independence, love, health - much more than Jane Austen ever had in her short life, in which mere financial survival was a constant struggle. But as Anne tells it, she's a bit more like Jane than people might think.

"One of my mantras in life is from the brilliant Mr. Oscar Wilde. He says, 'The less said about life's sores, the better.' I prefer to talk about the nice things that have happened to me and I'm very grateful and feel very blessed in my life, but, no, it hasn't been one big, easy, wonderful ride. There have been hidden [bad] moments in there, too, I assure you."

But none of those were on display at the "Becoming Jane" premiere; that night, both Anne Hathaway and Jane Austen shared a very happy moment together.