Jane Austen Quote of the Week 188 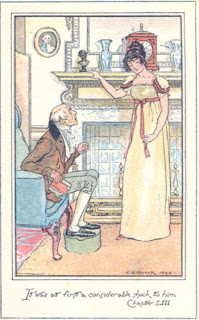 Sorry this is early but I will be unable to post this weekend.

This quote is in honour of strong, "rational" women. It was our dear Icha's birthday this week so this quote is for her.

From chapter 8 of Persuasion, Frederick Wentworth is having a discussion with his sister Sophia (and her husband the Admiral) about whether women should travel alone on board a ship.

"But, if I know myself,' said he, 'this is from no want of gallantry towards them. It is rather from feeling how impossible it is, with all one's efforts, and all one's sacrifices, to make the accommodations on board such as women ought to have. There can be no want of gallantry, Admiral, in rating the claims of women to every personal comfort high, and this is what I do. I hate to hear of women on board, or to see them on board; and no ship under my command shall ever convey a family of ladies anywhere, if I can help it.'

Later on she retorts:

'But I hate to hear you talking so like a fine gentleman, and as if women were all fine ladies, instead of rational creatures. We none of us expect to be in smooth water all our days."

Yes I think that some choppy waters can be the spice of life! 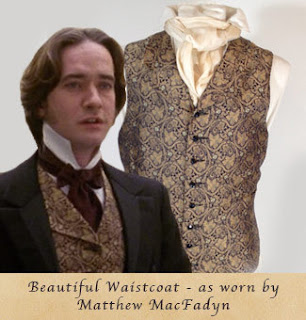 The Jane Austen Centre newsletter has made us aware of an exclusive auction now on ebay of original costumes from some of Jane Austen's film adaptations. They were chosen to host the eBay auction for the celebrated BAFTA and EMMY award winning costume designer, Andrea Galer.

The auction began a few days ago and ends next Sunday 25th March. Worldwide postage is available!

Pic: from the ebay auction

Jane Austen Quote of the Week 187 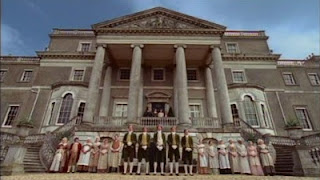 I have been bombarding myself with ‘Downton Abbey’ lately, including the basic circumstances that required Lord Grantham to invite Matthew Crawley to Downton (because his previous heir died during the Titanic accident, God bless their souls). I then remembered how similar things still were in 1912 with early 19th century when Jane Austen wrote Sense & Sensibility and Pride & Prejudice. Just take a look at a paragraph from SS Chapter 1 Volume 1:

The old Gentleman died; his will was read, and like almost every other will, gave as much disappointment as pleasure. He was neither so unjust, nor so ungrateful, as to leave his estate from his nephew; - but he left it to him on such terms as destroyed half the value of the bequest. Mr Dashwood had wished for it more for the sake of his wife and daughters than for himself or his son:- but to his son, and his son’s son, a child of four years old, it was secured, in such a way, as to leave to himself no power of providing for those who were most dear to him, and who most needed a provision, by any division of the estate, or by any sale of its valuable woods.

Thus Mrs Dashwood and the girls had to leave Norland, but thankfully not without meeting Edward Ferrars first (at least for Elinor’s sake).

And of course, in PP, we have Mr Collins, who, as Mr Bennet said in Chapter 13 Volume 1, “…when I am dead, may turn you all out of this house as soon as he pleases” to which his dear wife replied with “Oh! my dear…I cannot bear to hear that mentioned. Pray do not talk of that odious man. I do think it is the hardest thing in the world that your estate should be entailed away from your own children; and I am sure if I had been you, I should have tried long ago to do something or other about it.”

All of these conversations gave me a very strong desire to understand why the entail had to be designed as such to put women in such a disadvantage situation. I think it has been enacted since early 13th century. Pemberley has a link about an entail, including a very complicated Male Primogeniture Succession that explained that any entailed properties were inherited by the nearest male-line descendant (instead of female line).

My primary question is, is it still happening? If not, when did it cease? If it is, I cannot believe it. England is a modern country after all, now. But… even in Indonesia, inheritance is given to the eldest son, not daughter, until now. So why am I still surprised?

Rachel &c, care to explain it to me?

Labels: Pride and Prejudice, Quote of the Week, Sense and Sensibility

Jane Austen Quote of the Week 186

My quote for Jane will be a melancholy remembrance because a very dear Aunt of mine passed away two days ago. I go to attend her funeral on Saturday, the 10th. I wanted to find something that affected Jane to reflect the way I am feeling now. So, in her letter dated Monday, January 21, 1805 she wrote the following to her brother Francis Austen:

"I have melancholy news to relate, & sincerely feel for your feelings under the shock of it. I wish I could better prepare you for it. But having said so much, your mind will already forestall the sort of event which I have to communicate. Our dear Father has closed his virtuous & happy life, in a death almost as free from suffering as his Children could have wished. ....... Heavy as is the blow, we can already feel that a thousand comforts remain to us to soften it. Next to that of the consciousness of his worth & constant preparation for another World, is the remembrance of his having suffered, comparatively speaking, nothing. Being quite insensible of his own state, he was spared all the pain of separation, & he went off almost in his Sleep. My Mother bears the Shock as well as possible; she was quite prepared for it, & feels all the blessing of his being spared a long Illness."

Jane's words also apply to my dear Aunt, which brings me some comfort. Also, please note the date, January 21, 1805 and remember that Jane had also lost a dear friend, Mrs. Anne Lefroy in December, 1804. My heart goes out to her.

One of our blog readers has emailed us wanting to share her fantastic song about Jane.

Holly Christina dedicates her song to Jane Austen fans everywhere. It is available on iTunes also. 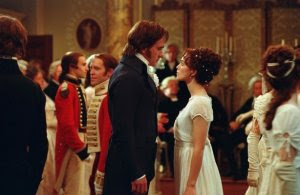 Pic: Elizabeth and Mr Darcy in Pride and Prejudice