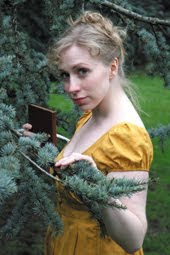 Last night I had the pleasure of going to a production of Austen's Women, a breathtaking performance from one actress playing multiple female Austen characters. She narrated in between the character performances, providing comments and some analysis. It was the voice of Austen herself who we sometimes would love to hear but is missing from adaptations.

Characters were chosen from the six main novels and also from The Three Sisters (her juvenilia work), The Watsons and Sanditon (Jane's unfinished novel). I particularly adored her accurate and astounding performances of both Miss Bates and Mrs Norris. Her repertoire also included Lizzy Bennet, Emma Woodhouse, Harriet Smith and many more. It really was a treat.

The production was directed by Guy Masterson and managed by Rebecca Vaughan but the ultimate praise had to be given to Bex Vaughan, the performer who recited Austen lines and switched characters so fantastically for 70 minutes with no interval.
I realise that most of you who read our blog are not in the UK but hopefully if popularity and awareness increases, there is a hope that the production may be distributed wider.
If you do however have the opportunity, I would recommend any Austen lovers to go to see it.
You can find out more at the theatre tours international website and there are a list of tourdates available.
Pic: theatre tours international

It sounds wonderful. If only they would tour the US!

Sounds great, i would of loved to see that myself.

Wooow... thanks a lot Rachel dearest for the eyewitness report!

So this actress, she read out a line for - say - Lizzy Bennet, and then made commentaries on it? That's so unique!

Yeah, wouldn't it be great to see it overseas? Better, to go to UK to see it!!!

Yes, thanks, Rachel, I guess we can still dream even if we can't make it to dear England.

All of you should come to the UK!!

Here is how Rebecca Vaughan performs Jane Austen who considers modern courtship and marriage in Britain, Channel 4 News, History's lessons for the present:

The video is available to watch outside UK

Brilliant, thanks for this information. VERY interesting.