Dear Michelle gave me the link to an independent article of Becoming Jane. It was written by Becky Kinder, one of the writers of Daily 49er, an online independent student newspaper at Cal State Long Beach. I like her elaborations, so here we go! 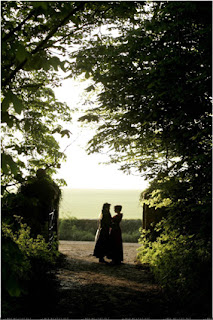 The film is loosely based on the few letters left between Jane Austen (Anne Hathaway) and her sister Cassandra (Anna Maxwell Martin). The script builds a torrid romance based on the letters in which Jane mentions only a few times a Mr. Tom Lefroy and a flirtation between the two.

The film, regardless of how accurate it may be to Austen's real life, takes us through the real constraints women faced at the time and admits that men faced certain social expectations and family obligations as well. Each sex found that societal and family ties can be detrimental to forming and continuing personal relationships.

In "Becoming Jane," we find that Jane and Tom (effectively played by James McAvoy) are an unlikely match at first. The simultaneous unraveling of their personal lives and blossoming of their romance is quite humorous at times.

The love and deep connection expressed so clearly and tenderly by Hathaway and McAvoy is a beautiful testament to what love and romance can look like in real life. The battle for each other's love, not to mention the battle for the support of their families, builds a tension in the story that wins over the audience's heart.

Each character is played quite well, and the portrayals are clearly based on English society's constraints in the 1700s and the emotions that flow from situations of loveless marriages, women who think and speak for themselves, and the responsibilities people have to their families.

Other notable performances were given by James Cromwell, Maggie Smith, Leo Bill and Julie Walters. Even the subtlety of Laurence Fox's performance as Mr. Wisely is quite worthy of mentioning.

There are times in the film when a minute or more can go by without any dialogue or storyline progression. The audience, however, is given frame after beautiful frame of the society and country in which Jane lived. These views, many times shot as though the audience is a living participant within the film, help create a greater connection to the audience and the experiences that may have come from life in 18th-century England. 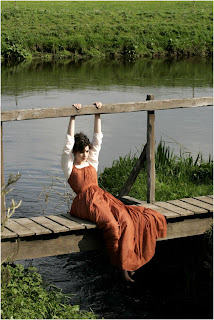 Some scenes, such as the one in the barn between Jane and her father (Cromwell), are shot with a handheld camera. The slight jostle of the camera and the angles it gives are contributing factors, giving a more realistic sensation of being a fly on the wall in Jane's life.

The editing connects this period film to modern audiences. The script and direction also help the audience relate to a lot of the exchanges among the characters. Indeed, the hardships they faced centuries ago can still be applied to situations we run into today.

A romantic film with bouts of comedy and action as well as a hint of surprise, this film's romance and storylines are definitely focused on dramatic and serious themes that can lead to the heartbreak of the characters as well as the audience.

Incandescent performances, script and direction make "Becoming Jane" a must-see. After seeing the imagined story of Jane and Tom's romance, it is up to you whether you agree with a line from the film that says emotion or passion "is absurd."

Pic 1: Tom Lefroy and Jane Austen at the Steventon gate, from james-mcavoy.net

Pic 2: Jane on the bridge, from annie-hathaway.com

Wow. I'm glad you liked my article. (The Daily 49er is published as well as posted online.) Thanks for the repost! : )

Thank YOU Becky for your article as well. Hope you enjoy this blog, come and join the discussions sometime. At the moment, we're discussing Mansfield Park.