Michelle has provided me again with an in-depth interview of Anne Hathaway with Comingsoon.net. Here's the link to the entire interview, and I shall only quote the part about other Austen movies and chemistry that I have not read yet elsewhere. 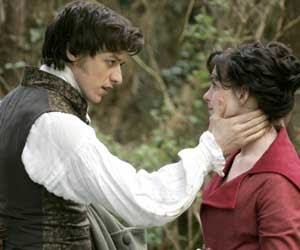 CS: When you were cast as Jane, did you watch any of the films based on her novels and did you derive anything from them?

Hathaway: Oh, yes. A lot of anxiety, that's what I derived. (laughs) My favorite—and I gotta keep it in the family—is "Sense and Sensibility." Just everything about that movie is as perfect as it could have been. That's an extraordinary film. I also loved "Persuasion," the BBC version with Amanda Root, I thought she was an absolutely delight, and I really love that one. I loved "Persuasion" because I think it's a little bit bleaker than the others but it's also beautiful to get caught up in Ann Elliot's transformation. In fact, it was "Persuasion" that convinced me I was really doing the right thing by telling this story. Tom Lefroy was born in and maybe this is nothing and maybe I shouldn't have hung my hat on this one fact, but in the story, Ann Elliot is attending a concert, and Captain Wentworth has arrived and everyone is so impressed with him, including people who disliked him before because he was poor. He arrives and Catherine overhears someone talking about him, someone who had previously denigrated him, and this person said, "Oh, who is that very impressive young man? He has an air about him. Irish I would think." I don't know if that has anything to do with Tom Lefroy, but it seemed fitting. And so, "Persuasion" meant a lot to me when I was making this movie. Also, I thought the recent adaptation of "Pride & Prejudice" was an absolute delight. I think Keira Knightly was heaven in it and I think Joe Wright is genius and I can't wait to see "Atonement."

CS: Can you talk about how you established chemistry with James McAvoy and were you able to shoot the scenes sort of in order with the way they happened in the movie?

Hathaway: (laughs) No, no one cares about putting scenes in order to help us out. That's the least of their concerns. It's funny. The questions that people ask about chemistry. There's no formula to it. It's not like getting into a character of finding an accent or choosing what costumes your character would wear. It's really something much more intangible. I like James. I really like James McAvoy as a person. I think he's smart, terribly clever, a lot of fun, a brilliant actor and so, I just enjoy spending time with him, maybe that's what came through. Maybe he and I understood our characters well enough that we were able to let that relationship come through. Who knows? But it's nice to watch.