Oh, no! Carrigglas Manor is turned into a hotel!

Linda just sent me news of the most alarming and disturbing nature. Apparently, Carrigglas Manor, the house Tom Lefroy built, is about to be turned into a 4-stars hotel with spas and golf course! The Manor itself will magically be transformed into a 19 rooms hotel. This is the excerpt of what Carrigglas of Longford says:

Set on 660 acres of lush pastures, and mature woodlands filled with ancient oaks, beeches, ash trees and sycamores, Carrigglas is one of the last remaining walled estates in . 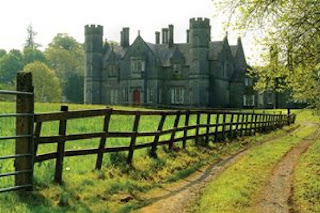 With its celebrated avenue and Palladian courtyards designed by James Gandon, who also created The Customs House and Four Courts in Dublin; and a magnificent Victorian Gothic manor house by Daniel Robertson, who was responsible for the famous Italian Gardens at Powerscourt; Carrigglas has been described by Homes and Gardens Magazine as “truly delightful” and “a treasure”.

Originally the seat of the Bishop of Armagh, Carrigglas became the home of the Huguenot Lefroy family in 1837, remaining in their ownership until now. Thomas Lefroy, who commissioned Carrigglas, was a friend of the novelist Jane Austen. They were romantically involved for a time, and it is believed that she based the character of Mr. Darcy, hero of Pride and Prejudice on him.

Carrigglas Hotel, a new four-star, 96-room complex, with a stunning glazed atrium giving views of the parkland and golf course, is being built with the best of local materials, and with the best of contemporary design in mind. With its distinctive stone walls, grassed roofs and glazed façades, the hotel, spa and leisure complex is both a destination for world travellers, and an amenity for Carrigglas residents. 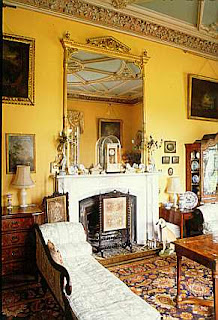 The romantically castellated and turreted house was designed by the prominent Irish architect, Daniel Robertson of Kilkenny. Chief Justice Thomas Lefroy, who built the house, was a youthful inamorato of the novelist Jane Austin, it being frequently suggested that the character Darcy in Pride and Prejudice was modelled on him.

With the transformation of Carrigglas, great care has been taken to preserve both the heritage and character of the estate. Restoration work has sensitively incorporated the original gate lodges, farm cottages, Manor House, as well as the famous .

The following is the picture of a long stone wall taken by Elisabeth of Belfast from her blog as she visited the site (my apologies for no prior consent…). 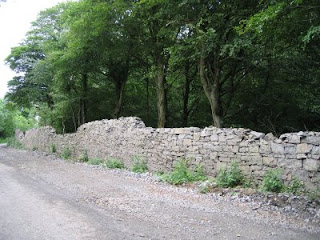 I don’t know what to say…Rachel and Kari are about to go to , and what they (especially Kari) will find is a hotel! I hope the Manor is indeed preserved and the books... oh, I hope the books remain! But will she be able to lurk inside the Manor now? I hope the books are kept safely by Jeffry Lefroy now.

By the way, Carrigglas Manor was not built in 1837. According to the Memoir of Chief Justice Lefroy, the great house was built beforehand circa 1830. The Lefroy family had lived in Carrigglas before 1837 (one of Tom's letter for Mary was dated 5 October 1834). In 1837, Tom Lefroy renovated the Manor with the help of Daniel Robertson, Esq., an English architect (not Irish, as the website said, though Robertson did reside in Ireland). A very heavy hurricane on 6th January 1839 destroyed some parts of the house, hence Tom Lefroy had to rebuild it again later on.

Pic 3: The large complex of hotel and houses in Carrigglas, from Carrigglas of Longford

Pic 5: the project stone wall taken by Elisabeth of Belfast

Hi! My name is Noelle, and I wasn't sure if I should post about this here, but I made a bunch of Becoming Jane Icons and I was wondering if you would like to use them??

You can view them by going to this URL: http://www.virtualpeace.net/pages/goodies/icons/movies.php

Hi Noelle! Thank you for the information, I will make the proper announcement for the next article.

Your icons are lovely, and I am sure the BJ lovers will like them ^_^