My Visitation of Ireland finally arrives! I’m so happy! The book is bloody thick, like a 600 plus pages of a Harry Potter book. Full of nice family crests and who was who. Anyway, Linda has given me the list of the children of Thomas Langlois Lefroy and Mary Paul before, but I still waited for the book so that I can post the scanned pedigree that has the Jane Christmas name as well. Now, as the book has arrived, here’s the list of Tom Lefroy’s children.

There were another son (Benjamin, born March 25, 1815) that died in infancy. All of Tom Lefroy’s daughters (Jane, Anne and Mary) were never married. Weird, huh? Below is the scanned image of Tom's pedigree that contains his name and Jane Christmas Lefroy's. His pedigree is rather long, so I don't scan them all. 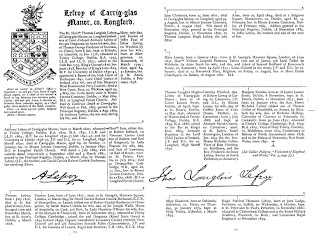 Linda has also tracked down the pedigree of Christmases and Pauls, and there is a possibility of Mary Paul’s grandfather named Christmas Paul (hence, Jeffry Paul’s father then). I will post it in another article once we fix the broken link of the Paul/Christmas family tree. If we cannot find the link, I will post it anyway with notes. By the way, in Visitation, Jeffry Paul is only mentioned in Tom Lefroy's page, and no mention of Christmas family either! Still, I got the pages that I want... and the entire book of pedigree, though not complete.

Pic 2: Scanned pages of 'Visitation of ' that contains the names of Tom Lefroy and Jane Christmas Lefroy

this is so interesting! how funny that in the movie jane was told (by cassandra as i recall- not sure!) that she'd have children once every 2 years, and that's pretty much what tom's real wife did!

Karen, sorry I didn't reply earlier - I missed this comment.

Yes I agree, very interesting, is it not? I didn't recall any particular conversation, but it has been months since I saw it the last time.

I hope you read the latest post about Tom Lefroy circa 1818 and his nephew Thomas Edward Preston Lefroy, who was also a barrister. Interesting stuffs.