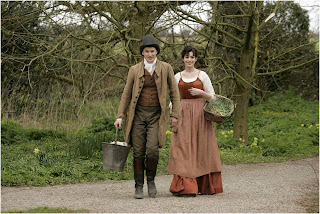 One of the many things that made me love Becoming Jane was the interactions between Jane Austen and her brothers in the movie. Granted, the movie only included Henry Austen and George Austen there, and left Jane’s other brothers in the conversations only. But it was very important to me that George Austen, of all people, was included. People who have read JA biographies would learn that George was a forgotten son in the Austen family due to his mental incapability. After reading more info about George, I was glad that Julian Jarrold &c decided to include George in the movie, paying homage to Jane’s abandoned brother. So, this is a short article and a tribute to George Austen.

George Austen (1766 – ) was actually the second son of Revd. George Austen and Cassandra Leigh. He was born with a mental handicap; hence he was kept away from the rest of the Austen family. It was one of the dark secrets of the Austens that David Nokes elaborated in his 1997 biography, Jane Austen: a Life. However, Claire Tomalin’s book (2000) of the same title recalled George in a slightly different light; George still received the luxury to become the godson of Mr. Hancock (Eliza De Feullide’s father).

Tomalin noted that George, who possibly suffered cerebral palsy, still lived in Steventon as a child. On , Mrs. Austen wrote to her relative Ms. Susannah Walter that she was at home with her four sons; that would mean that George was still in Steventon in 1772, with James, Edward and Henry. However, in 1779 a decision was made to trust George to a Culham family who lived in Monk Sherborne, about three miles from (Nokes’s version was Cullum, instead of Culham). George would later spend his entire seventy-two years there with his uncle, Mr. Thomas Leigh (brother of Jane’s mother Cassandra Leigh), who also suffered mental setback. Hence, based on Tomalin’s analysis, Brother George Austen was still in Steventon when Tom Lefroy met Jane Austen during the 1795 Christmas holiday, as portrayed in Becoming Jane.

George Austen was rarely mentioned in the Austen family letters, except for several occasions, e.g. in letter where Mr. Austen wrote to Susannah Walter that ‘We have this comfort, he cannot be a bad or a wicked child’ (Tomalin 2000, p. 8). However, the Austens seldom visited George in Monk Sherborne. At best, James Austen paid Mr. Francis Cullum a routine visit to give the latter the Austens’ contribution for George’s expenses (Nokes 1997). I am not sure if there is any letter of Jane talking about his brother George (she talked of other George, i.e. her nephew in Letter #60 (24-25 October 1808)(Faye 1997), but Tomalin mentioned that Jane Austen knew deaf and dumb sign language, as observed in her letter from the year 1808 (she talked ‘with my fingers’), hence it is possible that Jane sometimes interacted with Brother George in real life; or at least wrote about him in the confiscated letters. At any rate, it is very likely that Jane disliked her family’s indifferent treatment of George, for she wrote to her niece Fanny Knight, ‘Pictures of perfection as you know make me sick & wicked’ (Letter#155, 23-25 March 1817), although the letter was talking about Fanny’s admirer James Wildman (Nokes 1997).

Not unlike the way Jane silently paid homage to his Irish friend Tom Lefroy in her novels, the English authoress also paid her tribute to her forgotten brother George. Nokes noticed that in Persuasion, the Musgroves had an ill-fated son named Richard (Volume I Chapter VI). ‘Poor Richard’ was a ‘troublesome’, ‘thick-headed’, ‘unfeeling’, ‘unprofitable’ and ‘hopeless’ son, hence ‘had been sent to sea, because he was stupid and unmanageable on shore; that he had been very little cared for at any time by his family, though quite as much as he deserved; seldom heard of, and scarcely at all regretted…’

To me, it is interesting that Richard was once a crew of Captain Wentworth’s ship, and it was Wentworth who encouraged Richard to write to his family. The interesting part for me is that Wentworth was the embodiment of Tom Lefroy, and Richard was Jane’s way of paying homage to his brother. And in Becoming Jane, George Austen was there when Tom Lefroy interacted with Jane Austen…

In 1827, Edward Knight (the third son of the Austens) gave his entire inheritance from his mother (£ 437) to George (Tomalin 2000). Much later on , George Austen died of dropsy. In contrast to the grave of his famous sister Jane, George’s grave remained an unmarked grave in the churchyard of All Saints Church, Monk Sherborne. His death certificate only had the note of ‘A Gentleman’, proposed by George Cullum, son of Francis Cullum, George Austen’s life-long caretaker (Nokes 1997).

In Becoming Jane, George Austen was played by Philip Culhane, a partially deaf actor, who taught Anne Hathaway a rudimentary sign language for the purpose of the movie (see celebritywonder.com). George Austen was even an important player in the movie. In Becoming Jane, he was obviously not mentally-handicapped, for he responded appropriately to what his sister Jane and his mother said to him. George also chased Henry when his younger brother played with his rather silly hat. George was present when Tom met Jane for the first time in Steventon. George was ‘listening’ to Jane’s story of Tom Lefroy’s boxing adventure in Laverton Fair when Jane found out that Lady Gresham was visiting her house. George was also the one whom Jane walked with after she accepted Mr. Wisley’s proposal. And when Jane was busy convincing George (and herself) that she would be happy with Wisley, George was the one who spotted Tom Lefroy standing a few feet behind them. With sign language, Brother George also innocently asked if Jane loved Tom, to which Jane negated furiously, only to immediately receive Tom’s hot kisses over her.

I understand that the inclusion of George Austen in Becoming Jane might be inaccurate, although it is very likely that George was still in Steventon in 1796/97. But I love that historical inaccuracy, for it gave the movie more depth of a brother-sister bond between George and Jane, something that the real Jane Austen could not enjoy during her lifetime. And perhaps, although the real Jane might stand up and say ‘Pardon me, that scene is not correct for what truly happened was this and that’, I am confident that she would also thank the filmmaker and wished that George indeed was so much involved in her life.

Yes, dear Icha, that was a lovely touch for the movie. I am glad they put George in it.

When I first saw George, I thought, wow...that guy portrayed a deaf man beautifully. I didn't think that he was truly deaf though (partially), so it was an added bonus to get Philip Culhane for George Austen. Plus, he's cute you know...

Oh thanks so much for doing this post Icha. I absolutely loved the inclusion of George in the film. The bit when he tried to stand between Tom and Jane in the 'very' emotional woods scene was so touching.

I was reading in Irene Collin's book and I thought I would add a couple of things:
"He had started to have fits shortly after being put out to nurse. By the time he was four, his mother had resigned herself to the fact that he was epileptic."

Also, Eliza's son, Hastings, proved to have learning difficulties and there is a reference to George in a letter that Eliza's mother, Phila, had written to her brother, Rev George Austen, about little Hastings:
"we all fear very much his faculties are hurt; many people say he has the appearance of a weak head: that his eyes are particular is very certain: our fears are of his being like poor George Austen."

Thanks a lot, Rachel. Yes, I forgot to include Eliza's Hastings. Poor Hastings... I suppose his mother's wealth enabled him to escape the seclusion of an epileptic patient... such a terrible medical condition at that time, eh? Glad that we live in the 21st century now... despite all flaws.

Oh, and today (21 August) is the Abolition of Slavery Day in Australia! Freedom for all!

Poor George. I'm glad they included his character in this movie.