Defying the tradition of previous Austenian movies, Becoming Jane was filmed in Dublin and some countryside of Ireland, instead of Hampshire, U.K., the birthplace of Jane Austen. The movie indeed received funding from the Irish Film Board, but as Julian Jarrold said in an interview with Phase9 Entertainment, the decision was mainly driven by the fact that ‘Hampshire now is groomed and manicured and we were able to find in Ireland was a sense of countryside that felt more unchanged. That was one of the things that I really wanted to get... a sense of the landscape in which Jane Austen grew up. Ireland also has a great variety of Georgian houses and older houses as well. I think it gave us quite a different and interesting look for the film’. 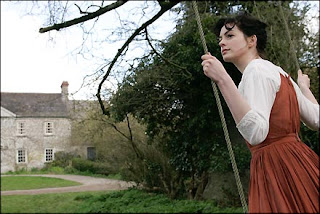 At first, I was rather disappointed that the movie was not shot in England, but then after reading this interview, I was convinced that it was the right decision. The bad weather somehow created better lighting and soulful feelings for the movie, not unlike the bad weather in the Legends of the Falls. And after all, Tom Lefroy was an Irishman, so it kinda paid tribute to him as one of the most important figure in Jane Austen's life. In addition, in an interview with the Britfilms, James McAvoy said that he liked the fact that the houses in Becoming Jane were 'left to recede a bit more, a bit more gritty that you haven't seen in Austen films' and thus portrayed a 'sense of reality and a sense of poorer world' in the Regency Period. Yup. A good choice indeed, and I mean it.

See Film 2006 interview with Anne Hathaway, James McAvoy and Julie Walters for better viewing of the set in Dublin. I hope that the DVD will feature landscapes and buildings used to make the movie, for they are very beautiful indeed!