Isabelle has provided me the complete review of Becoming Jane from Empire Online. Thanks, Isabelle! The reviewer (Liz Beardsworth) gives BJ four stars out of five.

Plot
Young Jane Austen (Hathaway) spends her time scribbling stories and reading the results to her family. It’s a secure if dull existence, and when the rakish Tom (James McAvoy) arrives in the village, sparks soon fly. But Tom has secrets which threaten their future.

Another month, another James McAvoy movie, and all the better for it. The ubiquitous and consistently excellent McAvoy this time plays roguish Irishman Tom Lefroy, here presented as the gentleman who caused a young Jane Austen to question her sensibility and consider instead her sense.

The role of Austen — that most inscrutable of lady authors — is taken by Anne Hathaway, an unpopular choice with those who swooned at the thought of a Yankee assaying such an icon of English literature. Yet she proves more than adequate, playing Jane as a coquettish, spirited young woman intriguingly at odds with the wry, detached presence of her novels. Owing much to the biography by Jon Spence, it’s a clever narrative device, this dichotomy echoing the question addressed in her most popular novels: is it better to follow your heart or your head? Far from simple literary debate, Becoming Jane offers this recurrent dilemma as the painful reality of Austen’s earlier life, and a struggle that had such a profound effect she could never quite leave it alone — in print, at least.

As such, the characters peopling the young Jane’s life are plainly recognisable as the prototypes for her most celebrated characters: Julie Walters’ anxious mother and James Cromwell’s strong, fair-minded Mr. Austen are clear relatives of Pride & Prejudice’s Mr. and Mrs. Bennet; Maggie Smith’s aloof, disdainful dowager exemplifies the snobbery and social climbing that provide context for Austen’s romances; McAvoy’s cocksure, worldly Lefroy is the epitome of the outwardly arrogant, inwardly sensitive hero of whom Mr. Darcy is the paradigm, while Jane herself shares the wit and passion of Austen’s most beloved heroine, Lizzie Bennet. 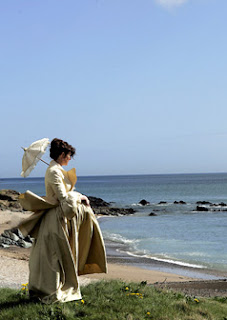 The A-list supporting players offer solid work, yet for all their talents at times feel anonymous next to the engaging leads. This really is McAvoy and Hathaway’s movie, the pair boasting a chemistry that fizzes from their first encounter, as trainee solicitor Lefroy — exiled to his country relatives after disgracing himself in the city — snores his way through Jane’s recital of her latest writings, much to her distress. Archetype he may be, but he’s also unavoidably, earthily real, and as bickering and banter develop into an irresistible attraction, the will-they-won’t-they relationship proves at least as delicious as that of Darcy and Lizzie. Indeed, for the first hour you might be watching an Austen adaptation rather than biopic, director Julian Jarrold making the most of moonlit trysts and pretty locations to create a fun period romance.

But it is in the second hour, after Jane uncovers Lefroy’s secret and finds herself forced to pit love against duty, that the emotional pitch of the film develops and real life is revealed to be far messier, agonising even, than any work of fiction. It’s a twist that adds a powerful new dimension to Austen’s story, underlining the film’s central thesis as to the role of writing in her later life: offering her the happy endings that reality, perhaps, could not. That theory is a little too neat to be entirely convincing, much less revealing, but the film’s quietly emotional denouement is undeniably touching, and there is much here to savour.

A charming, intriguing biopic, given extra depth and sparkle by attractive performances from its superior cast.

I was searching for the Becoming Jane script, or any news on a movie tie-in which would likely contain the script or excerpts, and I stumbled across an intriguing title, "Becoming a Heroine". Instantly reminded of Northanger Abbey, and chuckling a little, I opened the link, and was shocked to find a notable Jane Austen connection!

You may be interested: Rachel Brownstein's Becoming a Heroine: Reading About Women in Novels (Gender & Culture)

Review
A splendid book, a rare combination of critical brilliance and personal warmth. Brownstein speaks for a generation, perhaps a tradition, of passionate women readers; she stands for literary values that need to be defended against the chilling abstractions of contemporary theory, and that remind us why we read and how we shape our lives by our books.

Synopsis: This splendidly provocative book shows how good novels, intelligent heroines, and careful readers are skeptical of the romantic ideal of a perfected, integral self.


Publishers Note: Analyzes the image of women and the theme of the choice of a husband in the classic novels by English authors, such as Jane Austen, Charlotte Bronte, and Virginia Woolf.


Amazon has a "look inside" feature, which includes the index page which luckily shows all of the references to Jane and her novels. It looks like fascinating reading regardless of the JA connection. I've added it to my list! Have a look! :D

The thing is, I'm running out of budget for I just ordered Le Faye's 'Jane Austen's Letters' from Amazon, so this Becoming a Heroine might have to wait.

How about you read it, and tell us what you think of it later on? We invite 'freelance' reviewers, you know! ;-)

I've just ordered the "Letter's" too! I will order "Becoming a Heroine" and I'd be delighted to provide a review. :) The more I think about this new book, the more I hope it's excellent. The premise is promising. Can't wait.

I can imagine that your budget is taking a rather large hit.

Good luck with your assignment!

Icha, I want to look into the Brownstein book too. I can get it through Interlibrary loan, so don't forget that avenue before you buy it. Brownstein seems to be around my age which makes it more interesting for me.

Thanks Michelle for stumbling across it and letting us know.

Michelle dear, you DON'T wanna know how much I've spent for Jane these last few months ^_^

Anyway, sure, just write a review and email me, I will post it here for you.

And Linda, congrats for your first comment! Everyone, this is Linda, our librarian. I can't do without her and Rachel!

Well, I'll stop being jealous of your collection and start working on my own. :p

If you ever hear about a movie tie-in, or the BJ screenplay, please let me know! I collect screenplays and would particularly like this one...