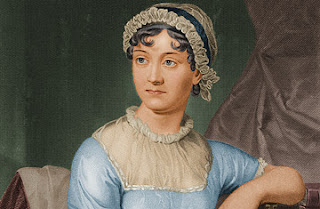 Thanks to Michelle, here's the Time review of Becoming Jane by Lev Grossman dated August 3, 2007. It's a positive one (though Lev still thinks that Jane looked like Cassandra's sketch). The entire interview can be found here, and below is the excerpt. Thanks Lev for writing the article!

Becoming Jane, an Austen biopic starring Anne Hathaway, opens this week. September will bring the movie of The Jane Austen Book Club. Masterpiece Theater is currently re-filming four of the novels—Mansfield Park, Northanger Abbey, Persuasion, and Sense & Sensibility—in preparation for a marathon broadcast of The Complete Jane Austen next year. We can't seem to put down Austen, or leave her alone, or get to the end of her. She has become a commodity for which there is an infinite demand.

On the face of it Austen is an unlikely object for cult worship. She was born in 1775 in Hampshire, England, the seventh of a country clergyman's eight children. She received a smattering of education. She later moved to the city of Bath, which she didn't much care for. She is known to have received one marriage proposal, from a younger man with the odd name of Harris Bigg-Wither, which she at first accepted and then, a day later, declined. Although she started writing fiction in 1789, Austen didn't publish a novel until 1811; all of her six novels would appear anonymously. Six years later she was dead of an unspecified illness. By our standards she barely seems to have lived at all.

But there she is onscreen in Becoming Jane, vital and vivacious, although Anne Hathaway, with her broad mouth and her un-pin-uppably wavy hair, doesn't much resemble the one authenticated image we have of Austen, a sketchy portrait by her sister Cassandra that now hangs in the U.K.'s National Portrait Gallery. (Olivia Williams, who starts in the upcoming tele-bio-pic Miss Austen Regrets, can claim the better likeness.) Irrepressible and unconventional, Jane plays cricket and the piano, scribbles in her bedroom, and flirts with a witty but financially precarious young lawyer named Tom Lefroy, played by James McAvoy (you may recognize him as the faun from the Narnia movie, though here he's more of a satyr). Lefroy is not only rudely handsome, he's at least partly historically factual—there was a real Lefroy, with whom Austen really flirted. "He has but one fault, which time will, I trust, entirely remove," Austen wrote in a letter to Cassandra. "It is that his morning coat is a great deal too light."

Ultimately the flirtation came to nothing, and Lefroy went on to marry an heiress and become Lord High Justice of Ireland. Becoming Jane does its best to flesh out an episode about which historical information is scant, since Cassandra burned most of the relevant letters. Much is made of suggestive maybe-coincidences, like the fact that Lefroy would name his first daughter Jane. But the result is stately and quite affecting, and the matter it inquires into is one of the supreme mysteries in all of literary biography: Austen, the greatest chronicler of romantic courtship in any era and any language, never married. While her characters passed by the dozen into the Promised Land, she remained behind.

This curious fact underscores a truth frequently neglected about Austen's England, that life there was often difficult and painful for women. Unless they were fortunate enough to have some kind of financial autonomy, women were essentially forced to sell themselves as commodities on the marriage market. The possibility of downward mobility was ever-present, lurking beneath the thin ice of their own charm and attractiveness. To preserve their value, women worked hard to safeguard their fragile sexual respectability, as defined by the Byzantine social codes of the day. 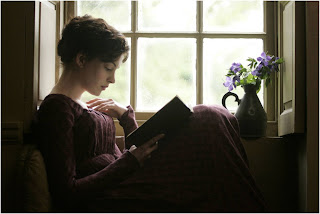 Austen's adapters have to tread a perilously narrow, wobbly line between grim historical honesty and the seductions of Regency glamour. "Because it's very pretty clothes and very pretty houses, the danger is that it just looks very chocolate-boxy and cute, an escapist thing really," says Julian Jarrold, who directed Becoming Jane. "Part of the point of the piece is how dictated economics and money were, and the whole marriage market, and how that dominated women's lives." The margins of Austen's novels are strewn with miserable spinsters and hollow marriages—her stories end happily, but she always makes it clear that her heroes and heroines are the exceptions, the lucky statistical outliers. "I've got a bit of an argument with a lot of the more traditional admirers of Jane Austen, and also fans of costume drama," says Davies. "These are stories about young men and women at a very crucial time in their lives, when they're boiling over with hormones, and they're in a society in which—for the girls at any rate—you usually only get one chance of getting it right, and if you don't you're on the shelf for life, and often financially disadvantaged." He pauses for reflection. "Although I must say, I do like the costumes."

Pic 1: a colour rendition of Jane Austen in 'A Portrait Gallery of Eminent Men and Women in Europe and America'. Johnson, Wilson and Company, New York, 1873, from the Time Online

Pic 2: rendition of Jane on the bridge, original file from annie-hathaway.com

Pic 3: Jane by the window, from annie-hathaway.com

There is nothing really new here, and I was surprised to see it on the site yesterday - after all, BJ opened on 30/05 and has finished in most theatres.