To continue the fun thread of signs of Becoming Jane obsession, here’s the second part of ‘You know you’re obsessed with Becoming Jane when…’, starting from #46, taken from the IMDB message board:

... you decide to start researching the story to see if you can find out more, which helps pass the time till Aug 3rd. Of course the BJ Fansite helps a lot! (kdesign23) (Thank you, Kari!)

The film hasn't even come to your country yet () and you've already watched the trailer 10 times in one day. Is it August 10 yet? (blondie2000)

You order the Jane Austen Regency World Magazine edition March/April 2007 because it has a very nice cover of Becoming Jane, though you have downloaded the pdf article plus your dear co-admin sent you her scanned version earlier. I’m gonna be broke if am not careful...

You check the imdb board daily for any new news. As if there would be any new news. There won't be, of course, because you already know you have to wait until August 3rd to see what your Briton friends have already seen (Garnet10)

You check Yahoo! for movie showtimes to see which theater it is going to open in on August 3rd, even though you know fully well because of your particular job you won't be able to see it on opening night (Garnet10)

You have two versions of the trailer downloaded on your computer and you watch them daily, sometimes more than once a day because you just can't wait to see James McAvoy on the big screen (Garnet10)

You relentlessly scower YouTube for new clips you may have not seen yet! (kdesign23)

You haven't even seen the film, but you're already making blends and fan fiction after seeing the trailer right before Harry Potter and the Order of the (butterflybabyeva)

You plan to talk to your Blockbuster supplier if you can get the BJ DVD poster for free a month after the DVD release. They won't need it anymore anyway! 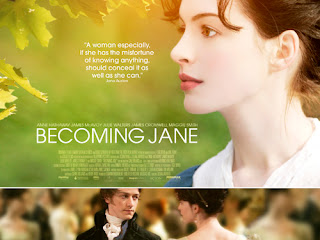 You've read Icha's Becoming Jane review on Amazon, and fumed at the other users who gave it less than five stars (Joely_snowflake) (Icha: Aaww...Thanks a lot, Joely!)

You check Amazon every day, just to see if the DVD release date has been brought forward (Joely_snowflake)

You have five Becoming Jane adverts (all on your notice board) that have been ripped out of magazines by your friends, as they hope if they give you one you'll shut up going on, and on about how wonderful the film is (Joely_snowflake)

Because you have run out of money to buy the soundtrack, you go to the Becoming Jane website and just listen to the pathetically small excerpts that play... (Joely_snowflake)

Thanks a lot, Michelle! Much appreciated ;-)

Ok! I admit this! I'm completely obssessed with Becoming Jane!
It's awesome! It's wonderful! It's... perfect! :)

Hola, Lu cre ci ta! Thanks a lot for your passions! Hope you still like navigating around the blog; we have quite a few articles here...