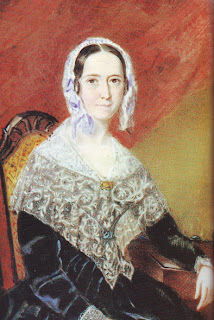 To end a busy day, I would like to thank Laura Boyle of the Jane Austen Centre in for adopting my previous article about Anna Lefroy (nee Austen) in the Jane Austen Centre website, particularly in the Austen family biography. During our conversations, Laura also gave a point that I missed out, i.e. that it was possible that Jane Austen did not attend the wedding of Anna Austen, for some unknown reasons. The info was apparently available in 's Jane Austen's World that I, alas, do not have.

On a side note, once more information is available, Rachel is going to write an article about the upcoming Miss Austen Regrets, a BBC TV production. Ms. Olivia Williams (Jane Fairfax in A&E Emma 1997) will play Jane Austen. Check IMDB for more development of this news. It is also interesting to note that Miss Austen Regrets was the title of a New York Times article written by Claude Rawson on 14 September 1997 to analyse David Noke's Jane Austen: A Life.

This is information about Miss Austen Regrets from the BBC site:

Based on her life and letters, Miss Austen Regrets tells the story of Jane Austen's final years.

When asked by her young niece, Fanny, to help vet potential husbands, Jane finds herself re-examining her own romantic life.

As she approaches 40 years of age, Jane appears happily unmarried and, to her niece, she seems an expert on love. Protected by her wit, Jane presents a front as dazzling as many of her novels' young heroines, but events conspire to potentially expose Jane's principled theories on love and marriage as ill-judged.

A chance re-acquaintance with a former suitor sees Jane lose her composure, and, when she meets her brother's dashing young physician, her passions are ignited.

Then, when her family faces financial ruin, it becomes apparent that all could have been very different had Jane accepted a marriage proposal from a wealthy landowner...

Apparently, the production will focus more on Mr. Bigg-Wither than Tom Lefroy or even that mysterious man who died not long after Jane met him in a seashore resort. Well, we shall see. All in all, 2007 is a good year for Miss Austen.

This is completely irrelevant to the post, but I just saw the movie for the first time last night and I loved it!! Although it was very late when I saw it and I was very tired from an Italian dinner, I absolutely love love the movie. If I don't get a chance to see it again in theatres I would definately purchase the DVD. To me it's a very good movie to watch when you want "me" time. I'm so glad I dragged 5 other people to see it, although they were completely devastated with the ending as, I think, we all were.

Oh, so glad you love the movie, Plyoathina! And do drop your comments on the movie anywhere, it's okay. Unfortunately, we don't have the proper system yet for pulling comments...

And thanks for dragging your five (FIVE!) friends to the movie... hope they had kleenex with them ;-)

Too early to judge the lineup, but I think some of the cast has been officially announced on the project website? (I am too lazy to look it up now - will do tomorrow)

It is intersting to note that Olivia Williams played Jane Fairfax in the Beckinsale Emma, and Greta Stacchi, who is billed as Cassandra, played Mrs Weston in the Paltrow Emma. :)

Wooow...I didn't notice that Greta Scacchi will play Cass. I love Greta's Mrs. Weston, so brilliant and lovely. It's funny, eh that both Cass and Jane 'used to play' in Emma. And they have Edward Austen-Knight as well! Wooow...

I wonder how Adrian Edmondson will portray Henry Austen though. I guess he will play a much older Henry; which is good, for, to me, Joe Anderson was THE young Henry Austen now. Ooohh... to have a brother like that!

Revealing the Romance Behind Jane Austen a Press Release on "Miss Austen Regrets:

Almost. The cast is confirmed and plot details revealed. It will be very interesting.

LOL! Michelle, you're SO funny! Now, I don't wanna be the 'purist' Jane/Tom here by having reservations towards Miss Austen Regrets... but so far I know, Jane never regretted her decision to refuse Mr. Bigg-Wither &c. At least, I don't see Harris in Jane's novels. But it might be just me...

"...Jane's passions are ignited by his handsome young physician..." - Waaaaaaaah! It's sounding more and more like Randy Miss Austen!

I can't stop laughing at the "ignited passions" but I'd better shut up before I completely embarrass myself, and am forced to do a 180 when it is revealed to be quite charming...

Anyway! I will email you. ;p