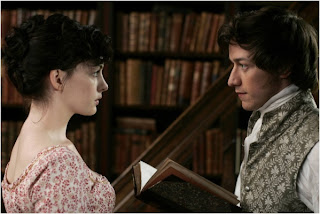 After Michelles comment on a recent blog, she has provided us with yet more reviews for the film and I am going to present some of them below. Thanks again to you Michelle!

My favourite of this set is written by Bruce Westbrook and I have pasted the whole article below and highlighted the bits that I particularly like (link is a http://www.chron.com/disp/story.mpl/ent/movies/reviews/4990504.html) 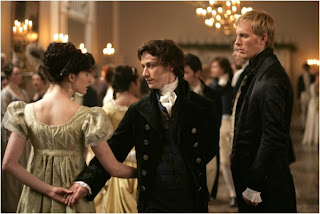 "Becoming Jane is a gem of a period piece showing how a 1790s British woman, repressed by sexist conventions, became an enduring novelist.

The rub is that Jane Austen (Anne Hathaway) drew her novels from her life, so showing that life with fitting fictional flourishes feels too familiar after a rich diet of Pride and Prejudice and Sense and Sensibility. In effect, their inspiration — her own experiences — become Jane's inadvertent clichés.

Yet, like Jane's handsome beau, the film seduces. Beautifully produced, from production design and costumes to music and performances, it's also faithful to the genteel spirit and repressed passions for which she's known.

Much like Renée Zellweger's Beatrix Potter in the recent Miss Potter, Hathaway's Austen yearns for freedom to express herself, whether as an empowered female and an author or simply as a woman in love. Yet she's smothered by class strictures, male dominance and brittle rules of propriety.

Enter Tom Lefroy (James McAvoy), a reckless young lawyer who depends on the allowance of his uncle, a tyrannical "hanging" judge. Tom's impetuous freedom and Jane's hunger for a hunk are a combustible combination, sparking scenes of rare romantic fire. Tom can promise nothing but the affection Jane craves, unlike wealthy but bland Mr. Wisley (Laurence Fox), whose proposal could lift her family from financial ruin.

What's a young woman to do? Follow her heart, of course, though circumstances won't make that easy.

Hathaway may be too identified with modern young women via The Princess Diaries and The Devil Wears Prada to embody tentative feminism of the late 18th century. But she's had her moments in costumers, too, from Ella Enchanted to Nicholas Nickleby, and her soulful radiance, much like Kate Winslet's, is durable and transcendent. 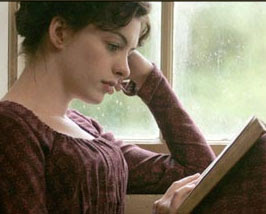 Austen's stifling world is oversold, given the fact that she has a large, warm family who live in modest — yet far from rustic — rural calm. With others making stiff-upper-lip sacrifices, she seems guilty of selfish entitlement.

Then again, passion makes fools of us all, as she says, and there's no denying her strong case for vaulting socioeconomic chasms, which seem quaintly dated today.

In America, the romance of lovers split by money crested and ended in the 1960s, when songs such as the Four Seasons' Dawn warned, "Think what the future would be with a poor boy like me." But as songs also say, all you need is love. Austen may have been born in the wrong place and time to make that truth work for her, but that didn't mean she couldn't bestow it on her characters."
The second review is from total film (link is http://www.totalfilm.com/cinema_reviews/becoming_jane) 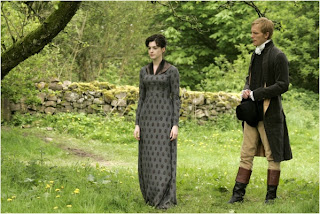 I have to agree with Michelle that this review is not my favourite although it is positive but I also cannot fail to include this line which is just over mid-way through the review:
"The role carries echoes of Sense And Sensibility’s Willoughby, just as Laurence Fox’s straight arrow could be a blueprint for P&P’s awkwardly undemonstrative Darcy."
I had not thought of Wisley with a Darcy likeness but it is very funny to think of him this way.

The third review: http://www.mysanantonio.com/entertainment/columnists/lratliff/stories/MYSA081007.WK.becomingjane.a316b4.html
written by Larry Ratliff at Express-News.
I like this line:
"the screenwriters use sketchy historical facts to place one of the world's most notable writers into a witty, heartbreaking romance of her own."
Although I obviously dont see all the facts as sketchy, I do think that the film is indeed witty and heart-breaking.
The last review that I am going to present here is from LA weekly film and tv and is written by Ella Taylor. Here is the link: http://www.laweekly.com/film+tv/film/becoming-jane-romp-and-circumstance/16951/
It is a somewhat controversial review but there is a line that stands out for me (the same line that Michelle highlighted in her comment): 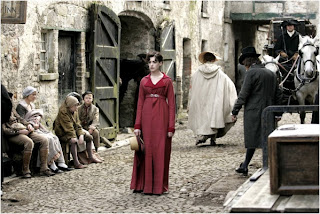 "...But two centuries after her death, Austen’s most potent theme —unavailable men, and the women who love them — continues to speak to women around the world, whether they’ve read her directly or through the romance novels (and, yes, self-help manuals) she inspired. This may be why, to the evident disgust of the manly critic sitting next to me, I wept like a baby when love lay bleeding on the ground."
This could not be more true! This picture of Jane looking so forlorn is heartbreaking.
After you have read the reviews, we would be most grateful for any comments that you may have.

Visit http://www.sanditon.net for more information about becoming jane and the screencaps :)

okay so here is a website to watch 'Becoming Jane' I had never had a chance to see it as of yet in the movies but I did find great version quality sound all fabulous.

Thank you Anon for the Sanditon link. I have added the link under the 'Becoming Jane links' on the left bar below. And now I also ask your permission to use some of the clips, with proper acknowledgment and the link to the source, of course.

Oua, thank you for the link as well. I just hope that the downloaded version does not deter your interest to go to the movie once it arrives in your place :-)
for watching the movie in the large 'silver' screen is such a treat on its own. Besides, it will help supporting the Becoming Jane hit as well.

Oua, I can't get any results for "janert" on veoh.com. Has it worked for you? All I find from Becoming Jane are two trailers.

Lovely post! I really enjoyed your highlighted sentences in the first review.

I also disagree with the "sketchy facts" comment - maybe buried/concealed facts is more correct? After all, much of the information is tucked away in what has been said and left unsaid, etc. :p

Pic #4 because I don't remember that dress at all. It's very lovely and sombre - perfect for the mood of the occasion. (It's also extremely flattering!)

Pic #5 is artistically beautiful contrasting Jane in red against the muted surroundings. The intensity of the red contrasting with the dispassionate neutrals. I suppose there is a lot of symbolism in this. At the moment I like looking at as a picture of her passion; a bleeding and supressed love. Very nice. :)

Pic #4 is the one she wore as she accepted Wisley's proposal in the most unromantic way ^_^ - that's after she heard that Tom Lefroy was to marry another girl.

And I agree Michelle and Rachel, though I didn't pay attention before, pic#5 does show Jane's bleeding heart there. Her red coat (lovely coat! Where can I buy one?) is so contrast with the muted colours of her surroundings. Lovely photographs!