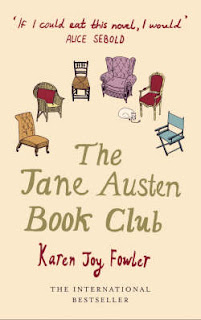 As I wrote a post focussing on the theme of latest Jane Austen productions, I thought that it was only right to mention another one that will be gracing our screens shortly. It is The Jane Austen Book Club directed by Robin Wicord (responsible for the screenplay of two of my favourite adaptations; Memoirs of a Geisha and Little Women) and based on the popular book by Karen Joy Fowler.

I read the book being a lover of Jane Austen novels and I thought it was a very clever way of introducing a more modern audience, that would not necessarily read Jane Austen, to the novels in an indirect fashion. It was very enjoyable.

It has a great cast list, starring Maria Bello, Emily Blunt and Hugh Dancy, to name just a few.
In the latest Jane Austen's Regency World Magazine there is a feature about the film in which Diana Birchall and Natasha Zwick (JASNA members) spent an afternoon on the movie set and reported their adventure. There are some great pictures. 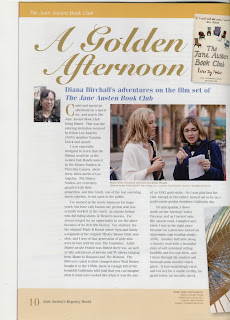 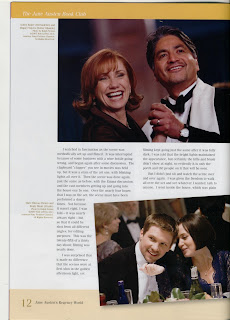 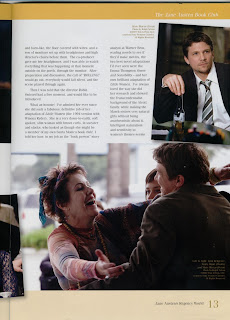 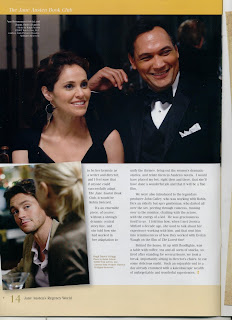 Pic: The cover of The Jane Austen Book Club by Karen Joy Fowler from http://www.turnerbooks.co.uk/

Thanks a lot, dearest! I will read the pages tomorrow... it's 2:30am already here!

But one comment on the book. I got confused when I read it... for who was the narrator? It kept changing every chapter, so I was not sure whose POV was the particular section.

Other than that, I am waiting for Emily Blunt's appearance as Purdie. I love Emily in Devil Wears Prada, I'm certain she's gonna be amazing here as well!

Thanks for sharing the article, looking forward to the movie! I doubt I could ever fall as in love with anyone but James McAvoy, but Hugh Dancy -- YUM! hehe. And, of course, can't wait to see all the JA appreciation and love! :)

I am looking forward for this one. I just saw Hugh Dancy in 'Ella Enchanted" recently and he is quite nice, though he is the same age as my son. Hee,hee.

Icha, I read the book a long time ago so I'm probably wrong, but doesn't each chapter begin with (something like) "Purdie's Story" and a quote, linking/foreshadowing THEIR life (inner Austen) with the JA book they were about to study? Isn't that how they get through the novels & reveal the POV? I remember thinking how ingenious it was at the time.

(Didn't you see HD in the Elizabeth mini-series with H. Mirren? Oops, better stop here b/c that brings on a whole load of other issues!)

Michelle... (me smiling sheepishly), I will check my book again tonight. Silly me... if it's not Tom and Jane, I'm not paying attention... and I call myself a reader :-D

Oh, and is HD that curly haired prince in Ella Enchanted? He's quite yummy, though I prefer James Yummy McAvoy!

Thanks a lot, Ladies!