When Tom Lefroy met Jane Austen for the first time in 1795/96, Regency clothing had begun to seep into the daily life of Englishmen. Laces and decorative embroideries that had been essential in the early and mid 18th century were abandoned, replaced with more sensible and carefully-tailored plain clothes. Breeches (an early incarnation of short trousers covering the body from the waist down, usually followed with silk white stockings) were out of fashion and being replaced with real trousers or pantaloons. Essential parts of men fashion in the late 18th century now included: linen shirt (without pleated frills at the cuffs and front opening), high-waisted waistcoat (vest), trousers, and cravat (a long clothe, usually white, tied around the neck several times; the predecessor of modern ties) and a coat with long tail and tall standing collar. Men in the late 18th century also often wore overcoats or greatcoats, such as the ones Joe Anderson (Henry Austen) often donned in Becoming Jane. The gentlemen also wore high boots (usually Hessian boots) and tall hats and carried batons. 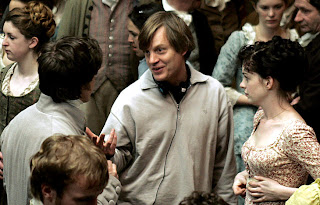 In the movie, James played a very fashionable Tom Lefroy. However, he once wore a white coat in the first ball (Basingstoke Assembly) in the movie, though white coat was not a fashion (see Pride and Prejudice Oxford edition 2004, explanatory note #6 p. 313, referring to p. 6 where Charles Bingley wore a blue coat on his first visit to Longbourn). On , Jane Austen wrote to Cassandra about Lefroy’s wearing a white coat and how she had disliked it (‘I rather expect to receive an offer from my friend in the course of the evening. I shall refuse him, however, unless he promises to give away his white coat.’ – Jane Austen’s Letters, Chapman 1979). The fact that light-coloured coats were not fashionable during Jane Austen’s time might trigger Ms. Mhaoldomhnaigh’s witty idea to put James in a light-coloured coat for the first ball. He did not wear a very white coat though, as seen up here (James and Anne talking to Julian Jarrold), but it still counted as light-coloured, and definitely not blue, which was a fashionable colour at that time. I will try to get a better picture of James in the white/cream coat. 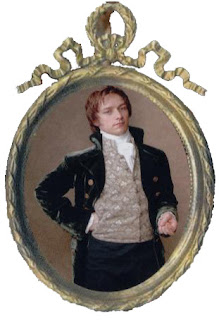 James always wore cravat – except when boxing – and he looked sooo good in cravats! Well... he looked good bare-chested as well, actually... Ahem. James often wore a tall hat and carried his baton (e.g. to Selbourne Wood and ). James also wore dark trousers, which looks better for him than the light one (both Colin Firth and Matthew Macfayden occasionally wore light trousers during their roles as Fitzwilliam Darcy in Pride & Prejudice 1995/2005, but I still prefer it when they wore the dark trousers). 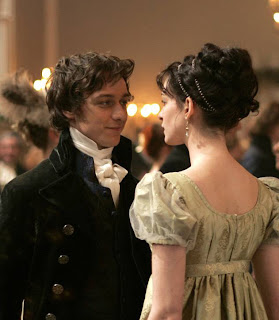 As Tom Lefroy, James had many dark velvet coats to wear; dark blue (during his first visit to Jane’s house), dark brown (in London), black (during the walk in the woods) and dark green (during the ball in Lady Gresham’s manor). Apparently, Basingstoke Assembly was the only time he wore light coat, possibly to receive a comment on Jane afterwards (referring to JA’s letter on January 16). 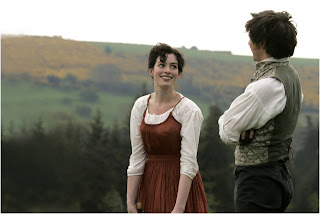 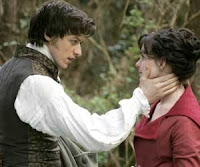 James also wore an ochre-coloured vest during the assembly and when he played cricket with Henry and Jane, but I am sure that Jane did not mind his ochre vest. He looked dashing there! During their elopement, James’s Tom Lefroy sported a very nice greyish or brown double-breasted overcoat that Jane would later hold on so dearly after she read the letter from Tom’s mother (See the article re: female costume to see James' grey overcoat). Do you remember that particular scene when Tom asked Jane if she was alright? I do… and I still feel broken-hearted. Sobs…sobs… Nooooo!!! 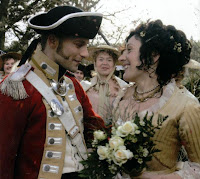 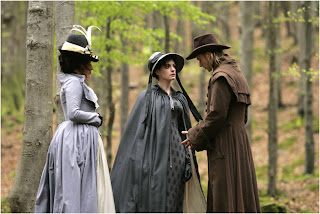 Ahem. Anyway. Joe Anderson was a handsome Henry Austen, and as an militia officer, he got to wear a beautiful scarlet uniform! Remember what Eliza (Lucy Cohu) said: ‘Scarlet looks good in you’? It was indeed! See the picture here on their wedding day. Also, here’s a picture of Joe/Henry with a brown overcoat that suited him very well.

The edited version of this article has been posted in Wikipedia.