The Dashwood family; Mr and Mrs Dashwood and their three daughters Elinor, Marianne and Margaret, live at Norland Park in Sussex. When Mr Dashwood dies, he leaves his entire estate to his son from his first marriage, John, and his wife Fanny who do little to help his mother and half-sisters, leaving them impoverished. This lack of fortune affects the marriageability of both Elinor and Marianne.

Elinor meets Edward Ferrars, the very shy and unassuming, but kind brother of Fanny (Mrs John Dashwood) and is instantly attracted to his intelligence and good manners. She is not convinced their feelings are mutual and it is obvious that Edward’s family do not consider the match suitable as they have high hopes that he will marry well.

Sir John Middleton, a relative of Mrs Dashwood’s offers her and her daughters a cottage in Devonshire and the family know they must accept, despite their sadness in leaving their home. They like the countryside, however, and are frequently invited to dinners at parties at the home of the Middleton’s. 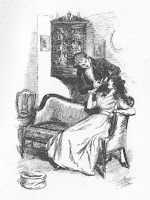 The Dashwood’s soon meet Colonel Brandon, a gentleman and a bachelor. He becomes very fond of Marianne although she objects to this older match. One afternoon Marianne is out walking and falls, spraining her ankle. This leads to her rescue by a very handsome man named Willoughby. They share the same passions and their attachment begins to grow and blossom. Willoughby openly confesses his affections for Marianne and this convinces the entire family that an engagement will soon be announced.

Then one morning, Elinor and Mrs Dashwood return home to find Marianne crying and Willoughby hastily departing for London. They are unsure of the cause of this incident and are left unsure whether to presume that the couple are engaged.

Edward makes a visit to Barton and does not seem happy or attentive to Elinor. It is apparent that he is wearing a ring and has a lock of hair that is not Elinor’s. This leaves Elinor distressed and confused.

Elinor and Marianne meet the Middleton’s new guests, the Miss Steeles. They find neither sister anything remarkable although Lucy is very pretty. Lucy takes to Elinor and reveals a secret that years ago she had secretly become engaged to Edward Ferrars. This angers Elinor although she appreciates the punishment that Edward will endure by having to marry Miss Steele.
Elinor and Marianne attend a party and they see Willoughby. He avoids Marianne and his behaviour is immensely rude; this devastates Marianne. They later learn that he is marrying a Lady Grey, solely for financial gain.

Months later and Marianne is still feeling grief over Willoughby; she walks in the rain and gets a serious fever. Colonel Brandon and Elinor stay with Marianne as they are both very anxious over her deteriorating health. She recovers and appreciates the kindness that the Colonel showed to her during her illness.

Edward visits again and tells Elinor that his brother has married Lucy Steele and not him. He proposes to Elinor and she is overjoyed. They marry at Barton that fall. 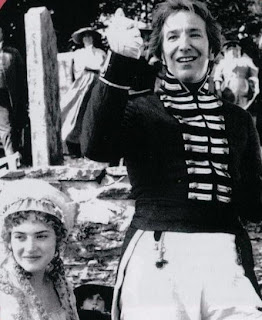 Over the next two years Marianne becomes more mature and finally accepts an offer of marriage from the Colonel, based more on respect than passion. She soon, however, grows to love him as truly as she ever loved Willoughby.

Edward Ferrars: He does indeed have some similarities to Tom Lefroy. He was engaged before meeting the love of his life. For Tom, this 'engagement' was somewhat different- his families lives depended on what decisions he made. It would have always been harder for Tom and Jane to be together. Edward had less to lose by declaring his love for Elinor.

Willoughby: I think that Willoughby represented the pressures that were present in society at that time. He had the firm expectation to marry for money placed on him, as did Tom. In Sense and Sensibility Willoughby does have the opportunity after he has married someone else to confirm his true feelings of love for Marianne. I think that this declaration is something that we all want to be true of Tom and Jane, i.e. a reunion years later.

Elinor and Marianne: I think that Elinor's sense and Marianne's sensibility may just represent two very existent sides of Jane Austen. Biographies have described her as sensible and practical. I think that this was a very important trait for her to hold and display in her life but I think that Tom Lefroy brought out the sensibility within her and this was transferred into her writing of such passionate feelings and emotions.