Manydown Park: where it all started... 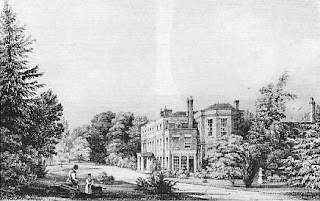 This is a picture of Manydown Park where Jane Austen and Tom Lefroy once danced together. In fact, it was in Manydown that our youthful couple did the ‘most profligate and shocking’ dances and discussions, as mentioned in Jane’s first letter (January 9, 1976) (Nokes 1997, p. 248).

I scanned the picture from Tomalin's Jane Austen: A Life, p. 271, of which original source was G.F. Proser's Select Illustrations of Hampshire (1833). According to Tomalin, the Manydown Park belonged to the Bigg family, who arrived in Hampshire in 1789. Widower Lovelace Bigg inherited the mansion from cousins Wither, and hence Mr. Bigg and his two sons changed their names to 'Bigg-Wither'. Three of his five daughters, who somehow retained the 'Bigg' name, eventually befriended the Austen girls. The young Harris Bigg-Wither, heir of the Manydown House, grew up to be an excellent educated young man who eventually proposed to marry Jane on the evening of December 2, 1802; seven years after the Lefroy affairs. Jane accepted the proposal on the very evening, only to change her mind and turned it down on the next morning. Apparently, Mr. Bigg-Wither did not leave impacts greater than the Irish Lefroy...

By the by, it is possible that Julian Jarrold &c took this Bigg-Wither character and developed him into Mr. Wisley, for Jane also refused poor Wisley's proposal for marriage. Why, Nokes even said that Harris Bigg-Wither was 'a less amiable companion. Tall, clumsy and awkward, he would shamble through the house, or lounge on a sofa, adding little to the general conversation' (p. 251).

Just a note, Mr. Wisley and Lady Gresham are fictional characters, for to my knowledge their names are not in any Austen biographies or letters at all. The Manydown Park was not included in Becoming Jane either, for Jane and Tom did their first dance in the Basingstoke Assembly Room. I will try to get the picture later and post it in another article.

Love the blog. Thanks!

Frances, thank you so much for your kind words! Yeah, so sad that the great house was pulled down... it's like the Steventon Rectory pulled down...

Luckily, we still have Carrigglas, though it's turned into a hotel now. But at least, we can still see its grandeur.

And thank you for the info re: Sir Arthur Bates. Truly appreciate it!