Joe Anderson was born in 1981 to his parents who are both involved in the film industry. He grew up on the outskirts of London, acting consistently through childhood. Acting was always his professional direction from a very young age.

He later attended Richmond Upon Thames College where he studied photography and then applied and was accepted to train at London’s Webber Douglas Academy of Dramatic Art. It is reported that as a hobby, Joe plays the guitar to a high standard and actively partakes in rugby, gymnastics and skateboarding.

Joe was very active at the Chichester Festival Theatre, contributing to film and stage dramatics. He has always been very conscientious in his work and has now established a rapidly developing, respectable filmography. Early in 2006 he appeared in Copying Beethoven, an account of the life of Beethoven, which stars Ed Harris. Joe plays the nephew of Beethoven. This film had great reviews in the US but is yet to be released in the UK. 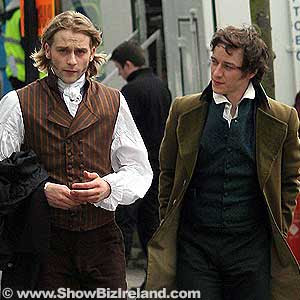 His next role was as the charming, loving Henry Austen in Becoming Jane. Joe plays Jane’s brother who became a very supportive, reliable ally to Jane and her writing career. He financially aided the publication of some of her novels and formed a very special place in Jane’s heart. Joe’s performance was perfect and he was the ideal Henry.

After Becoming Jane, Joe has gone from strength to strength with a main role in Across The Universe, a Beatles musical with a plotline involving Joe’s character Max going to the Vietnam War and placing himself in a fight for peace. His latest project makes him a star of the film Control, the biopic of the British band Joy Division. He stars alongside Samantha Morton and the film is released in the UK in October.

YUM!!! Joe Anderson was a verrry sexy Henry Austen! He and Lucy Cohu (Eliza de Feullide) created such a chemistry that complemented Anne/James'. Thanks, Rachel!

This fan site makes me want to see the movie now. But we Yanks have to wait!

Better Anne Hathaway site... more images and they at least don't steal from other sites...

Lilith, thank you for your comment, but I do not understand what you mean by 'steal from other sites'. Rachel and I ALWAYS try to acknowledge any images we have from anywhere, not only from www.annie-hathaway.com (if this is your concerns), but others as well. I also have specifically asked the AH.com permission for the posting of images. If we failed to acknowledge any images, it's NOT intentionally done.

If this comment is about your 'rivalry' with other AH sites, please refrain from making the war here. Rachel and I as administrators reserve the right to delete inappropriate messages.

If I misunderstood your message, I am sorry, and hope we don't go to war because of this :-)

Ms. Place, I also want to re-watch the movie again, so I have to wait for August to be over before the DVD is in. Well, the bright side of the delays for Yankees is that Rachel and I have more time to develop this webpage :-)

Costumes displayed in Chawton House is coming next, by the way.

I just wanted to add to Icha's response to Lilith's comment. We both are VERY conscious not to incorrectly reference any images that we use on this blog. If there are particular images or quotes that you are referring to Lilith then please do let us know and we will correct them immediately. I assure you that it is a mistake.

You need to update this page Joe Anderson did an amazing job in Across the Universe sooo give him some credit! Thank youu

Thanks a lot, Anon (are you James Kwak?) for the info so we can update this post with the recent achievements of dearest Joe Anderson!