Emma was written between January 1814 and March 1815. Emma Woodhouse is the imperfect, yet rather charismatic heroine of this novel.


Throughout the novel she dedicates her time to attempt matchmaking her friend, Harriet, even with firm discouragement from her good friend Mr Knightley. This serves to reveal how naïve and snobbish Emma is in her view of romance. She is very content in her life; she is pretty, intelligent and financially stable, consequently not perceiving any need for love. She has no mother and her father does not try to curb any of her behaviour’s; the only criticism she ever receives is from Mr Knightley. Over the span of the novel Emma’s attitudes change and she becomes less spoilt and softens to be more compassionate and aware of her social position and developing ability for kindness and love.

The novel begins with Emma and her father joining the wedding celebrations of Emma’s, governess, Miss Taylor, to Mr Weston. At the wedding Emma introduces herself to Harriet and here the matchmaking begins; she makes Harriet both a friend and a cause when she tries to pair her with the vicar, Mr Elton.

Emma paints a picture of Harriet under the view of Mr Elton and upon seeing it complete, he offers to have the picture framed which Emma believes is an indication of his feelings for Harriet. When Harriet receives a proposal from another man, Emma interferes and advises her to refuse him. Mr Knightley discovers this and lectures Emma for manipulating Harriet.
Upon leaving a party hosted by Mr and Mrs Weston, Mr Elton proposes to Emma, utterly shocking and alarming her. She realizes that his high opinion of the painting of Harriet was actually due to regard for the artist.

Emma and Harriet visit Miss Bates who has her niece saying with her, the beautiful Jane Fairfax. Emma is instantly envious of Jane. A few days later, Emma meets the son of Mr Weston, Frank Churchill, and finds him charming and fascinating. This is in bold contrast to Mr Knightley’s view of him. Frank reveals to Emma his suspicions that Jane Fairfax is having an affair with a married man.

At a ball, Frank dances with Emma and Mr Knightley dances with Harriet, yet Emma can only view Frank as a potential suitor for Harriet. News travels that Frank’s rich aunt has died, making him the heir to her fortune. Mrs Weston tells Emma that Frank is engaged to Jane. Emma tells Harriet, assuming that she may be upset but Harriet informs her that she is not as she has developed feelings for Mr Knightley; this instantly makes Emma jealous and she realises that she in fact loves Mr Knightley.

Emma and Mr Knightley have a confused conversation, both assuming that their love for each other is not returned, until he openly declares his love for her. Emma seeks Harriet to tell her the news and finds that Harriet is also recently engaged and very happy.


There have been a number of adaptations of Emma onto the big screen and 1996 saw the two more recent productions. For TV, Andrew Davies provided the script and the title role went to Kate Beckinsale. Based on a central theme of Emma being about how we can misjudge people based on appearance, Andrew Davies used this notion to create many witty scenes with numerous sequences of cross-purposes between characters. The same year, Douglas McGrath directed the highly acclaimed film starring Gwyneth Paltrow. 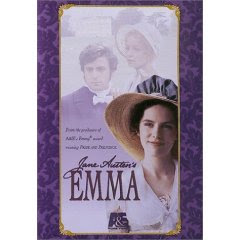 Thank you Rachel for this lovely summary. At first, I did not get Emma... but after three times viewing (heheh...blame the non-existence of English subtitle for non-native speakers like me...), I got the funny sides of Emma, and love her! Well, the Gwyneth Emma, for I have not seen the other Emma yet.

Another comment re: Frank Churchill, I think he resembled Tom Lefroy a bit in his attractiveness. Honestly, I can't decide which one I like better, Churchill or Knightley. Both are gorgeous, IMO!

Oh, also that 'Emma' was dedicated to Prince Regent, though I heard that Jane Austen did not really like him. Hehe...

Apropos the shadow story of Emma, go first to:

and THEN to my dormant blog:

If you have any questions, please feel free to ask me there.

Yes, I did visit your blog before I received this comment, a very interesting analysis, Arnie! I will read the Jasna ones as well.

Thanks a lot! By the way, I left you a PM in your email.

Readers, if you have prejudice against Emma, you have to read the three sites. So funny and will make you understand why Emma is considered JA's most intelligent novel!

I have just had the pleasure of also reading the Sheehan articles and your blog Arnie, thank you very much for the pointer. Sooooo interesting and I urge everyone to read them. Icha is indeed correct, the subtle references to the Prince Regent does highlight the immense intelligence and humour of Jane.

Thank you both! Colleen's discovery (which she was kind enough to share privately with me as soon as she made it, nearly 11 months prior to the publication of her articles) was the catalyst to my own pulling together ideas I'd had about Emma, that enabled me to peel several more layers off the "onion" that is Emma, and to get closer to its core. But I continue to find more stuff, and I wonder whether I will EVER get to the core, it's THAT deep! ;)

As romance-books are liked by many people.. I myself like to read it. These books will provide you with some love stories of the best writers in the world.
Emma is the novel of Jane Austen that was originally published on 23 December 1815.... In the first sentence of her novel, she gives an introduction to the main character as the "Emma Woodhouse, fine-looking, astute, and rich." The novel has been adapted many times for films, many TV programs, and here is a long list of the stage plays.

I am terribly sorry for our total slack of checking the old comments. We haven't been checking it for a while, thus we missed your comment. I will make more time to check comments from our dear readers. Please do forgive us for this oversight, and thank you for visiting us...