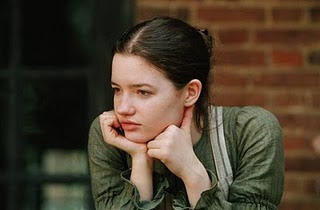 I wanted to focus on a character who always seems to be in the background of Pride of Prejudice. - Mary Bennet. I have never quite understood Jane Austen's feelings towards Mary; she portray's her as quite plain and socially inept but also a great thinker. Do you thinks he saw some of herself in Mary?
The quote is from chapter 47 after Lydia has ran away with Wickham. Mary says to Lizzy:

"This is a most unfortunate affair; and will probably be much talked of. But we must stem the tide of malice, and pour into the wounded bosoms of each other the balm of sisterly consolation."

Then, perceiving in Elizabeth no inclination of replying, she added, "Unhappy as the event must be for Lydia, we may draw from it this useful lesson: that loss of virtue in a female is irretrievable—that one false step involves her in endless ruin—that her reputation is no less brittle than it is beautiful,—and that she cannot be too much guarded in her behaviour towards the undeserving of the other sex."

The definition of virtue is 'conformity of one's life and conduct to moral and ethical principles' and she is correct that Lydia's behaviour has indeed put her virtue into question if she does not marry Wickham. I think that the use of the word brittle suggests that no woman's virtue or reputation is ever secure, it is fragile.

My question is, have things changed so much in the past 200 years? In society today, all things are more accepted and some standards have been shattered. I do believe, however, that internally in most women there is still a code of conduct which when breached or jeopardised produces a great sense of disease for the woman.
On the other hand, this quote can still be considered current in the fashion of double standards with women being heavily criticised for actions that a man would be praised for.
Mary opens up an interesting debate on the way women are perceived in society today compared to Jane Austen's time.

I also really like the term 'the balm of sisterly consolation' - I think that this is something which has not changed over the past two centuries and is unlikely to change over two more.

My dear Rachel, I agree with you on every point. I have often said that things have not changed in the last 200 years. I can still find in today's world the people whom Jane described. As a matter of fact one of my aunts is fondly called "Aunt Norris". So there. And I could not make it through life without my dear "Sisters". So there you have it again.

It's got to be good though that 'to follow your heart' (if such a course would lead to perceived disapproval) would no longer result in becoming a social pariah!

I agree with Linda though - people do seem to show repetitive characteristics all through history, even as far back as Homer. In a funny way, I find that comforting (as long as they are admirable characteristics of course...!)

Great site guys, keep it up!

Hi Ed! Nice to see you again! Been a long while, more than two years now. Hope the surf in Cornwall is still treating you well?

Rachel, re: your question:

I think that the use of the word brittle suggests that no woman's virtue or reputation is ever secure, it is fragile.

My question is, have things changed so much in the past 200 years? In society today, all things are more accepted and some standards have been shattered. I do believe, however, that internally in most women there is still a code of conduct which when breached or jeopardised produces a great sense of disease for the woman.

I think to some extent in developed countries and to MANY extent in developing countries women's position is still very vulnerable. If anything happens, it's easier to lay the blame on women, because we're the ones who are expected to hold all the values together.

What a tough job being a woman!

Its great to hear from you Ed, I hope you and the family are well.
I also find it very comforting to think that with all the technological advancements and environmental changes we are faced with everyday, human characters remain constant.
I agree Icha, it is tough being a woman!

Well I'm in a minority here, but do you think it's easier being a man...?

Hi Icha and Rachel, and Linda, hope this finds you well. All sorts of family developments that I could tell you about, the main one being that Mum and Dad have been hit very hard by the Irish banks collapse and are having to sell some treasured family artefacts - the Carrigglas dining room table that Thomas bought amongst other things. Still, my beacon of hope is that there isn't much of a market for huge Victorian pieces at the moment so they may never reach their reserve. Still, tragic to be losing these things!

I'm sorry for being late in publishing your comment (we have to moderate our comments to avoid some spams); I wasn't online yesterday.

I think you're very right: being a man is also hard. Being a good man who loves himself, and hence is able to love his partner fully, is even harder. I grew to admire those men.

I'm also sorry abt Carigglas furnitures and your parents' financial problems. I think we all have it to some extent these days... I hope the furnitures will receive good price and will help the damage control...