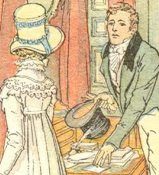 I just want to drop a note to thank Rachel for her speedy posting of the Persuasion summary below; for she will actually do the summaries of Austen's juvenilia, so she is quite busy! And before I go to see His Holiness Dalai Lama in Melbourne here (my, am I not excited!), I just want to say that I agree with Rachel's analysis of Persuasion, that it was written with a more (for the lack of better term) matured mind than Jane Austen's other novels. That is not to say that other novels are not great, though... they are!

I also agree that Persuasion pretty much reflects what Jane felt about Tom Lefroy; that Anne Elliot and Fred Wentworth could not be together because Wentworth had been considered... not worth it. That he was poor, and hence could not possibly be Anne's husband. But when Fred became a famous captain, Anne's family began to change their opinions to him. I sometimes wonder if Jane pondered... if Tom Lefroy had been a famous MP, or at least a richer lawyer by that time, or if Jane herself had been a rich gal... would they be together? I suppose, there was the possibility that those ponders created Persuasion.

In that note, I could not help thinking that Anne Elliot actually mirrored Jane Austen very much, and that Frederick Wentworth had a Tom Lefroy there. I also think that Lady Russell was a bit of Anne Lefroy, Tom's aunt that was also Jane's mentor, for Anne Lefroy might think that she did the best for Jane by sending Tom away, the way Lady Russell wanted the 'best' for Anne Elliot. Afterall, Jon Spence speculated that Anne Lefroy might try to make up with Jane by arranging a meeting between Jane and Judge Langlois, Tom's uncle and care taker (see Letter from Cork Street). Unfortunately, that event did not go well, for Jane Austen remained alone, and Tom (unlike Wentworth in Persuasion) married another girl.

By and by, I wrote my first Becoming Jane Fan-fiction based on Persuasion (Countenance So Beloved), with Rachel's beta editing. Please read and drop your comments.

Can I just say, thank you so much for making this site. It's always a real pleasure reading your regular, thoughtful, intelligent updates, and it's a very fitting tribute to the film and Austen herself.

Many thanks and much admiration.
Lucy (I think I do have an account but I'm too lazy to login).

Why, thank YOU Lucy for dropping to read the posts, and also reviewing this one. When we first started the web, we were unsure if it would serve the fans of 'Becoming Jane' and Jane Austen herself, thus encouraging words like yours fuels our spirit and passions a lot.

I love Persuasion because it is such a beautiful and mature love story. P&P will always be my favorite, but Persuasion is very dear.

Yes, Persuasion is very persuasive, aye? I think it's such a moving story indeed. Thanks for dropping a comment, Lady Jane!

Thank you very much for the comments above, it is so rewarding to here the words of other Jane lovers. As I stated in the summary of Persuasion, I think it is a very special story, not just because it was her last completed novel but because it is more mature style and the themes are so very poignant. Thanks again

Well done with such a comprehensive and sensitively crafted website--I sure hope the movie lives up to it!

I wish to add one comment about Persuasion, which i don't think has been made elsewhere in your blog. If it has, please excuse the repetition.

Radovici's short book (which I read last year), as you well know, has an excellent, extremely evocative chapter about the many apparent resonances of Persuasion with Jane Austen's feelings about Tom Lefroy. However, there is one particularly poignant echo which Radovici overlooked, which supports and validates her many other insights.

As I pointed out to my friend Linda Walker, and she included in her 2006 Persuasions Online article (which bears close reading because it has lots of great insights, including her intriguing insight that Jane Austen, in 1809, when she updated her Juvenilia story "Catharine, and the Bower", may have inserted oblique references to her experience with Tom Lefroy), I discovered a dramatic allusion to Tom Lefroy hiding in plain sight right there in the text of the novel, in Chapter 4:

"More than seven years were gone since this little history of sorrowful interest had reached its close; and time had softened down much, perhaps nearly all of its peculiar attachment to him...No one had ever come within the Kellynch circle, who could bear a comparison with Frederick Wentworth, as he stood in her memory."

The above passage, written by Jane Austen in Persuasion in 1816-7, is, to me, an unmistakable echo of what Jane Austen wrote in Letter 43 to her sister Cassandra in 1805, over eleven years earlier, which letter passage Radovici (correctly in my opinion) was the first to identify as an oblique reference to Tom Lefroy, which begins "Eight years, almost eight years had passed, since all had been given up...."

It is amazing to contemplate Jane Austen writing such a particularly meaningful and eloquent passage in one of her private letters in 1805, and then pulling it up, altering it, and using it in a novel 11 years later!

I can almost imagine Cassandra being supportive of her sister (to add to the pathos, did they realize then that she was dying?) working on Persuasion, by going back into her treasure trove of letters written to her by Jane, and reminding Jane of that passage from Letter 43?

Jocelyn Harris chose a marvelous title for her book "Jane Austen's Art of Memory"--surely this is a particularly beautiful example of that art!

Thank you, Arnie. I have read your comments and I am very impressed. yes, I've read Linda R. Walker's paper several times, and I used it a lot in my articles. Interestingly, I also noticed the similarities between Jane/Tom and Persuasion 7-8 years line while reading Persuasion (and after watching Becoming Jane), independent of reading Walker's; for I have yet found her paper by that time. In fact, I used Persuasion a lot in my BJ fanfic (Countenance So Beloved - http://www.fanfiction.net/s/3499447/1/).

By the way, Letter 43; which one is that? Monday 8 April 1805? Yes, I think that's very interesting. I have included this letter in my next article (Jane/Tom: Facts or Fiction?) in this blog. I shall let you know once it's posted.

And I have to read Jocelyn Harris' book as well! Gosh, so many books to hunt down!