The Homes Of Jane Austen

I thought that it was really important to include some details and piccies of where Jane Austen spent certain years of her life; the settings for some of her masterpieces.

She grew up in a rectory in Steventon, Hampshire and lived there until she was in her 26th year when she moved to Bath with her beloved sister Cassandra and her parents. She was very happy in Steventon and wrote her Juvenilia (including Lady Susan), Elinor and Marianne which later became Sense and Sensibility, First Impressions which later became Pride and Prejudice and probably Susan which later became Northanger Abbey.
In Bath, the family rented 4 Sydney Place from May 1801. She was neither comfortable nor happy and the family moved repeatedly to smaller dwellings each time. At this time in her life she did not write consistently but the city of Bath did provide a setting for many of her later novels; e.g. Persuasion and Northanger Abbey.

One of her dwellings in Bath where she lived for a few months after her fathers death can be found at number 25 Gay Street. Now at number 40 (same side of the street), The Jane Austen Centre exists to invite tourists and lovers of Jane Austen to experience some of the sights that Jane herself saw throughout her time here. The houses are Georgian and were built between 1735 and 1760.

I have visited the centre and it gave me an overwhelming sense of excitement to think that I was walking and seeing the places Jane had once seen and been. I really would recommend it to everyone who is interested in Jane Austens world. There are also organised walks around Bath where you can walk in her footsteps and see the other houses that she lived in during her time in the city.

Jane, Cassandra and her mother left Bath in 1805 and moved to Southampton to live with Jane's brother Frank and his family until 1809. At this time Edward (the very wealthy brother of Jane) offered his mother and sisters a cottage at his estate in Chawton, Hampshire. It is established that Jane was very excited about the move as she desperately missed the country life and soon after arriving in Chawton she began writing again; Mansfield Park, Emma,
Persuasion and began Sandition (never completed before her death).
She was finally in the first place where she felt completely settled since leaving Steventon 8 years prior. She remained here until her death in 1817. 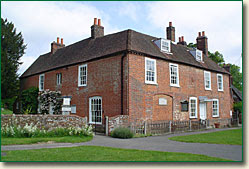 Jane Austens House Museum (Chawton cottage) is now also open to the public and it is definitely worth a visit! It is so clear why Jane loved it there, it is peaceful and cosy. They have many things on show such as her writing table (see picture) which is very moving to see. The staff are very informed and have a passion in Jane Austen and her work so this makes the visit so much more rewarding. They often have exhibitions running and currently there are costumes on show from 'Becoming Jane'- they are just beautiful.