As Rachel and I have written several trivia of Becoming Jane in Wikipedia, I just thought that it might be good to post them here as well. The first trivia is about the song Deh vieni, non tardar; I posted the entire text in the first post of this blog, actually.

The last scene in Becoming Jane shows Jane Austen, Eliza de Feullide and Henry Austen enjoying an aria performance in . The soprano sang Deh vieni, non tardar, an aria from ‘The Marriage of Figaro/Le Nozze di Figaro’, composed by Wolfgang Amadeus Mozart. Tom Lefroy was also present in the scene but hiding behind some decorative plants whilst observing Jane from a distance. The scene was a haunting parallel to the second part of the aria as shown below: 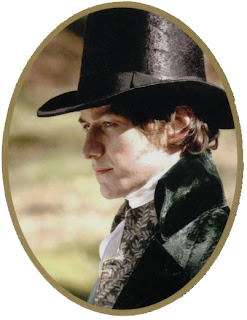 Here the river murmurs and the light plays
That restores the heart with sweet ripples
Here, little flowers laugh and the grass is fresh
Here, everything entices one to love's pleasures
Come, my dear, among these hidden plants.
Come, come!
I want to crown you with roses.

My heart sank to recall the particular scene, especially the look of Tom when he gazed at Jane later on. Sob-sob! Too bad, I don't have the pictures of the old Tom and Jane, but as soon as I do, I will post it here.

By the way, Elizabeth Bennet (Jennifer Ehle) also sang an aria of The Marriage of Figaro (titled 'Voi, che sapete' - 'You ladies who know what love is, see if I have it in my heart') in the 1995 Pride & Prejudice.