We are expanding our categoriesinto another one: ‘Cast & Crew’, which is about the brief biography of cast and crews of Becoming Jane (click on the left-side bar , below the Heartland Award icon, for all categories). Rachel is doing James McAvoy’s, and I do Anne Hathaway’s. We will alternately post the bios of other cast and also crews here, including (of course) Julian Jarrold’s, Maggie Smith’s, Julie Walters’s, James Cromwell’s and Anna Maxwell Martin’s, but now I will start with Anne’s. Rachel will post James’s after this. There are many sites that wrap up Anne Hathaway’s biographies, e.g. www.annie-hathaway.com and Wikipedia, hence I will be very brief here, and the readers can refer to those sites for further reference. 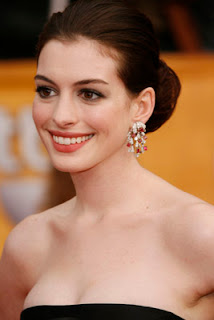 Anne Hathaway was born on in . She was the first teenager to be admitted to the Barrow Group Theater Company's acting program and she shows interest in choirs as well. In fact, she is a good soprano, and we can listen to her singing ‘Somebody to Love’ in Ella Enchanted.

So, anyway, as many AH fans, I first saw Anne Hathaway in The Princess Diaries (2001) where she was this shy Mia Thermopolis who, as many teenagers were, was unsure how to be herself. Though the movie was not her debut (the first one was Get Real, a TV series), Princess Diaries surely launched Anne to the sky of Tinseltown. Between 2001 and 2004, Anne took several roles, including the sequel of Princess Diaries (Royal Engagement), The Life and Adventures of Nicholas Nickelby (based on Charles Dicken’s novel with the same title where Anne played as Madeline Bray, the love interest of Nicholas Nickelby).

Anne Hathaway took more heavy roles as Allison in the R-rated Havoc (2003) and Lureen Newsome in the critically acclaimed Brokeback Mountain (2005). According to Wikipedia, her sensuous role in Havoc even prevented the movie to be screened in , due to concerns of conflicting interests and image with Anne’s other role as Princess Mia in Princess Diaries: Royal Engagement that was released in 2004. After , Anne voiced the Red Puckett in the Hoodwinked animated movie that was loosely based on the story of Little Red Riding Hood.

The year 2006 was a very busy and stressful year for Anne, for she had to cope with the legend of Meryl Streep ('Miranda Priestly')in The Devil Wears Prada. I, and many fans and critiques, believe that she was amazing as Andrea Sach and she stood tall, in a very nice way, next to Meryl, the way she did with Julie Andrews in Princess Diaries (I prefer the portrayal of Andy Sach here than the one in the novel, to the original novel was also a fun to read). The movie was an enormous fun to watch and it gained many positive reviews. 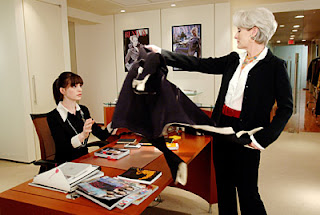 After ‘escaping’ Meryl Streep (Meryl is actually Anne’s favourite actress), Anne jumped to an even more challenging role as the Jane Austen, face to face with the Oscar winner Dame Maggie Smith, Julie Walters, BAFTA-winner Anna Maxwell Smith, James Cromwell and, of course, the very talented James McAvoy. I also have to say that James was the first actor that, at least to me, showed very authentic screen-chemistry with Anne's character. Prior to Becoming Jane, I sometimes thought of how great Anne's acting ability was, but it was a pity that she never found a screen-partner that truly clicked with her. That was, until she was paired with James McAvoy as Tom Lefroy. (Is there any award for 'Best Screen-Chemistry of the Year'? I think James and Anne deserve it!).Anne Hathaway took quite a preparation for her role as Jane Austen. Prior to the filming, she spent a month in England to do research and adjusting to British accent. In Jane Austen’s Regency World, March-April 2007, she said, ‘I re-read Jane Austen’s entire canon and read quite a few biographies. I also read critical essays on her, read her letters and researched the Regency period. I really tried to leave no stone unturned. By the end Julian was prising the books out of my hands because I was just pointing out details that incongruent with the script and the period. We all sat down early on and agreed that we were going to make a movie that may be contrary to the traditional perception of Jane Austen and her world. In some of her own letters she wrote about how she was hung-over after attending a ball and that’s not something we necessary think of when we think about Jane Austen. But I was very excited to present a woman who was flesh and blood and not simply someone who had an icy wit and tea running through her veins.’

Well, that’s exactly what Anne Hathaway presented us: a very charming, lively and energetic Jane Austen. An intelligent writer who had the full capacity to love and to be loved. At the same time, Anne has proven that she is indeed a very talented actress, capable of not only fresh comedian roles, but also heavier stuffs like reviving the legend of Jane Austen. Her concerns for humanitarian works, i.e. for the Nicaragua Hepatitis A Program, have made her my personal favourite actress as well.