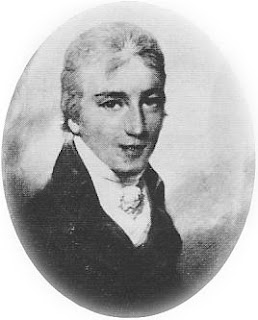 To my knowledge, this is the only painting of young Tom Lefroy by G. Engleheart in 1799. I scanned the picture from Claire Tomalin's Jane Austen: A Life (2000 edition, p. 271), and Tomalin took it from the Hampshire Record Office 23M93/83/1/1. The painting's excellent quality made me almost believed that it was a photograph - had I not remembered that the earliest photograph was taken circa 1820, three years after Jane Austen's death.

I like this young Tom, with light hair, lovely eyes and smile. Indeed, the Jane Austen Centre in U.K. said that Tom Lefroy was 'a serious young man with the light hair typical of the family. His prominent nose and deep blue eyes certainly present an overall picture of a “very gentleman like, good-looking, pleasant young man"' - as Jane Austen said in her letter on January 9, 1796 (blue eyes! James McAvoy also has piercing blue eyes!). Tom was born on January 8, 1796, less than a month after Jane's birth on December 16, 1775. So when they met, Tom was just celebrating his 20th birthday, and Jane just had her 20th birthday the previous month. 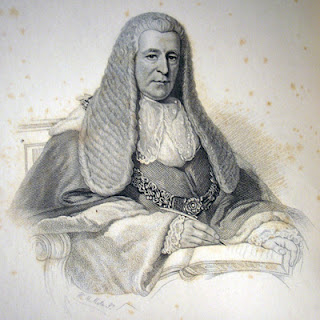 Now, this one... is the painting of old Thomas Langlois Lefroy as the Chief Justice of Ireland (uh, scary title, eh?). The painting was done by W.H. Mote in 1855 (in the Memoir of Chief Justice Lefroy)... so Tom was 79 years old! He still maintained that prominent nose, but he lacked that... shining spirit, IMO. Perhaps, it was because he was 79 (!) already, as opposed to a fresh 20, but I cannot help thinking that the family burden &c had eliminated that passion. Heh... don't let your son be the Chief Justice before marrying the woman he really loves! Ahem. Still, he was pretty healthy for a 79 years old guy, aye?

Check the Jane Austen Centre and Wikipedia for a brief review of Tom Lefroy. We will also do Tom's bio soon.

The section of Tom Lefroy has expanded beyond our initial intentions, so be sure to check out the About Tom Lefroy section for more info on Thomas Langlois Lefroy!