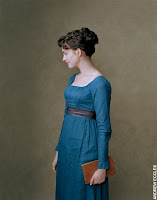 Costumes worn by characters in this movie are a mixture of the late Baroque/Rococo (also called Georgian) and Regency styles. Ms. Eimer Ni Mhaoldomhnaigh has done a great job at creating gorgeous costumes for Anne Hathaway (Jane Austen) and Lucy Cohu (Eliza de Feullide), and of course fans of James McAvoy would notice how he looked dashing (not that he’s not handsome, duh!) in his Tom Lefroy velvet coat and white cravat (cravat is a very good idea for James!). In this section, we are going to discuss costumes for female characters first. Tom would have to wait later.

The year 1795 was a special year for regency dress, for high empire line began to be a new fashion, and tight corsets were abandoned (yay! The whales were happy!). With the line placed below the breasts, Empire/Regency dresses tried to imitate Greco-Roman styles adorning sculptures and arts of female Greek goddesses and nymphs. Look at Wikipedia for more detailed explanations of the Regency fashion from 1795-1820. It was actually called ‘Directoire’ from 1795-1799, but it did not look so different, so here I just simplified it as ‘Regency’ or 'Empire' dress. 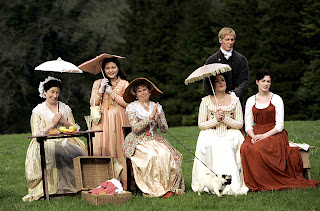 Austen’s first surviving letters to Cassandra was dated , and it was a day after Tom Lefroy’s birthday (interestingly, James McAvoy was also born in January, 1st January, I guess). We don’t know if Tom had stayed during the Christmas as well or not… but during the first week of 1796 (or since the last weeks of 1795), he had met Jane… and, according to the movie, the girl was very fashionable, for she adopted the new fashion of high-waist line! 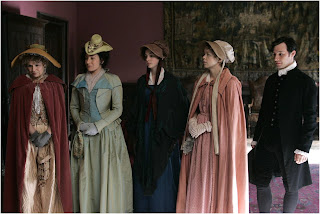 But, although 1795 was the beginning of the Regency fashion, many women still wore Rococo/Georgian-style dresses. In the movie, Eliza de Feullide was one of them, and my oh my… we cannot argue that Lucy Cohu looked elegant in her outer jacket and neat hat. Oh, by the way, Anne often wore a hat, or bonnet, to be precise, with ribbons (JA loved ribbons!) and occasionally shawl, for the relatively thin Empire dress materials were not sufficient for the climate of England/Ireland (and so it had been in the late 18th century, when the popularity of shawls increased to accommodate the thin muslins).

In the movie, Anna Maxwell Martin (playing Cassandra Austen) wore Rococo/Georgian dresses. In the OST cover, I just saw the pink Rococo-ish dress she wore during her walk on the beach with Anne after the latter arrived from London. I also remembered Cassandra's lovely pale blue ribbon during the sombre dinner in Lady Gresham’s manor where Cass heard that her fiancée (Thomas Fowle) had died in San Domingo, the Caribbean. I can still recall her sorrow…

Anyway, back to the costumes. Of course, the real treat of Regency dress in Becoming Jane is, naturally, Anne Hathaway’s costumes. Let’s see… she wore the lovely thick cotton-ish blue and red dresses, the floral dress she wore in the library (and for the Basingstoke Assembly) and the Belle-like red and white dress (during the cricket play or when she refused Wisley’s proposal… poor guy…) for daily work. She also had this lovely chocolate embroidered dress she wore on her elopement with Tom.

But the haut couture was the pale-green dress (silk-organza perhaps) Jane/Anne wore while dancing with her Mr. Lefroy in the second ball. Ah! I cannot forget their eyes... nor the lovely dress. And the pearl earrings! My God. Where can I get those earrings?! Anne's hair was tucked in Grecian style, by the way, an easy but lovely hairdo, with a lovely pearl-adorned headdress. 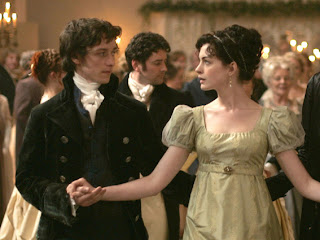 Anne also wore a lovely empire-line red coat during her visit in and her elopement. Lovely coat for sad events… sobs! I think she wore a straw bonnet with red ribbons for both occasions. 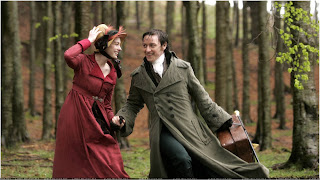 I also recall that Jane was the only woman who constantly wore the empire line dresses, with the exception of the red Belle-like dress. I guess, it served to make Jane (Anne) the centre of attention, not that she really needed that… 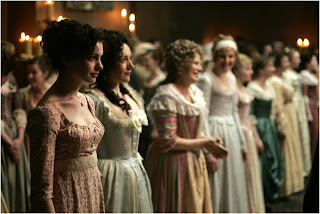 As I said earlier, Rococo/Georgian dresses were worn by the rest of female characters. Lucy Lefroy also wore a cream Rococo dress whenever she wanted to charm Tom (didn’t she get it? Tom was a dashing, fashion-up-dated, Londoner. Of course Jane’s chance of capturing his heart was better with new lines of Regency dresses! LOL!). But the feast of Rococo dress was again in Eliza’s. I was particularly interested in her silver white ball gown she wore with Henry Austen. Her wedding dress and the red dress in were handsome as well. I will try to get the picture later.

For further reading, see History of Western Fashion in Wikipedia, notably the late Baroque/Rococo era (1750-1795) and Regency era (1795-1820). I have posted the edited version of this article in Wikipedia, with the help of Rachel, of course!

Hi, I just found your website - I'm a fan of Jane Austen and James McAvoy, esp. as Tom Lefroy. However, I've noticed a mistake in this message while browsing: Thomas Fowle, Cassandra's fiance, didn't die in India, but in the West Indies, i.e. the Carribean.

Ooops!!! Thanks a lot, ptasia! Really. It's very nice to have someone noticing this mistake. I've fixed it now, but if you notice anything else, by all means, drop me the message.

Great, fansite! Very well researched...
I hate to be pedantic, but there's a tiny terminology error on this page:
You've called the movie a mix of "late Baroque/Rococo (also called Georgian) and Regency styles," which isn't quite correct.

Baroque and Rococo are two completely different periods.
I think the confusion comes from your reference page (the always excellent "La Couturiere Parisienne' at www.marquise.de). On that page she if referring to the 18th century as comprising of late Baroque AND Rococo fashion.
The Baroque period begins in the early 1600s and ends either in the late 1600s or early 1700s (depending on who you talk to), while Rococo comprises most of the 1700s.
(but these terms apply more strictly to the arts than they do to fashion, where styles tend to bleed between the two periods).

So 'Becoming Jane' is a combination of late Rococo (ie, late 18th century) and Regency/Empire fashion.

Anyway, awesome site, I love all the great Austen links and information!

Jenn, thanks a lot my dear friend for noting out the difference between Baroque and Rococo styles and how I mis-read it. Been a long while since I wrote the article, I would hardly remember how I made the mistakes had I not put the source in it (hurrah to proper citation!). And that still came with the mis-reading, sigh...

Anyway, I hope you enjoy the rest of the posts. Surely you will find many more mistakes, so just yell out and we/I will respond to it. Thanks and welcome aboard!