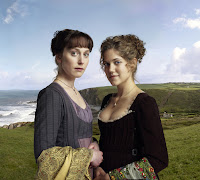 Andrew Davis's long-awaited adaptation of Sense and Sensibility will screen in North America over two 90 minute episodes on March 30 and April 6, 2008. The mini-series will close the three month PBS extravaganza "Sundays with Jane" which will bring together all six of Jane Austen's novels on the small screen for the first time as a complete collection.

From the Masterpiece Theatre Press Release

Touted as a "bold, original, authentic and powerful" and, "romantic, witty and stylish" mini-series, Sense and Sensibility 2008 is one to watch out for. Davis, famous for ramping up the eroticism in period pieces, has described his adaptation as a "sort of rural Sex and the City," and he promises to set hearts racing with a new version of the memorable "wet shirt scene" made famous by Colin Firth in Pride & Prejudice 1995.

In true Davis-style, he has maximised Austen's back story:

'I want to do justice to the back story, the one about Willoughby in particular, which is quite interesting and steamy stuff like a lot of underage sex that goes on and is just talked about. I want to put it on the screen.'

I live in New Zealand, and three of the new ITV adaptations have already screened, but I am hanging out for Sense and Sensibility. I can'twait! Andrew Davis is responsible for my two favourite Austen adaptations: Pride & Prejudice & Emma, and I have every faith that he will deliver with his adaptation of Sense & Sensibility.

I have a huge respect for Andrew Davis because I believe he stands out as a faithful interpreter of both spirit and content. Much is made of his “sexing up” the classics, and whenever I read the latest screaming headlines, I chuckle to myself. We live in a generation where entertainment is saturated with sex simply to sell it. Davis isn’t guilty of this ‘crime’. Yes, the media is trumpeting a sexed-up version of Sense & Sensibility, but look what they wrote about the beloved Pride and Prejudice ’95 prior to its release!

“Andrew had been asked in an interview what he was currently writing. He mentioned Pride and Prejudice and, in the same sentence, the words ‘sex and money’. The tabloid newspapers needed no further encouragement. ‘SEX ROMP JANE AUSTEN’ hit the headlines. This new version, they confidently asserted, would have full-frontal nudity and daring sex scenes. The broadsheets picked up the story. We even featured in the cartoon on the front page of The Guardian. Jane Austen experts were consulted and were quick to condemn this ‘spiced-up’ version. No one, of course, bothered to telephone me to check if the story was accurate. It wasn’t. No doubt we made a mistake when we described the novel as sexy; what we meant, of course, was that Darcy staring at Elizabeth across a room is exciting, that Darcy and Elizabeth touching hands the first time they dance is erotic.’

From The Making of Pride & Prejudice

2008 is shaping up to be an exquisite year for Austen lovers!

High resolution copies of all of the above Sense & Sensibility production stills are available from: LadyBlueLake

Michelle dear! Thanks a lot for the four posts altogether! So sorry that I cannot see the Sundays with Jane... but I look forward for SS 2008, though I doubt that anything can surpass Kate Winslet's Marianne singing and running down the hill. But I will keep an open mind.

Thank you so much Michelle for doing those posts....they are really good and I love the choice of pics!!

No, thank you for inviting me here! I had such fun, especially with the pictures. :p There is such a treasure trove of them to choose from ... Rachel, check out the NINE new S&S publicity stills in the above post! I am pretty excited about this mini-series, even though I love and adore the Winslet version. It's exciting that we have the US & UK airing dates, hopefully NZ & Oz are soon after the UK dates (late Dec)

Wonderful!!! xo
I agree. I adore the Winslet version - but I mini of this will be so fun with so much more to enjoy. I wonder how much more will be in this version, from the book, that didn't make it into the Ang Lee version? Exciting!