I did write a post a few months ago (see here) but we now have more information to post. 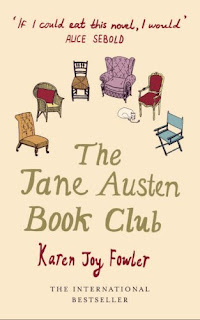 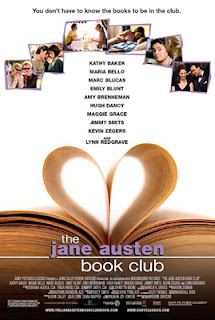 The popular book ‘The Jane Austen Book Club’ by Karen Joy Fowler has been made into a film, directed by Robin Swicord (Little Women and Memoirs of a Geisha).
It had limited release on 21st September in parts of the US with the main release on 5th October and has been very well received at the box office. I am writing this now as I am very excited because the film will be released here in the UK next week (16th November). 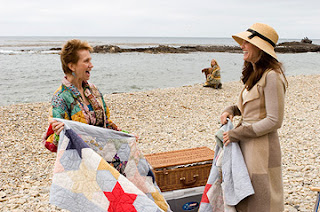 The premise of the film is six Californians (five women and one man) who regularly meet up to discuss Jane Austen’s novels over a six month period (a novel per month). Bernadette is a very strong, older character who has set up the book club to help her friend Sylvia to deal with her marriage breakdown. Sylvia has a feisty lesbian daughter, Allegra, and a single friend Jocelyn who also join the club. The final members are a strange, uptight teacher called Prudie and the rather dashing Grigg. They are each interesting characters and the plot focuses on their individual lives which cleverly parallel the themes of Jane Austen’s writing. The story really allows us to appreciate how relevant Jane Austen’s themes still are in the 21st century.

Overall, the majority of reviews have described it as a ‘feel-good film’ which is the best kind in my opinion. One particular review found at Yahoo Movies is pasted below: 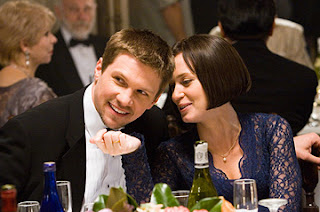 The performances in Jane Austen are definitely one of the keys to the film's allure. Maria Bellois particularly good as Jocelyn, a woman who won't open herself up to a meaningful relationship, preferring to lavish affection on her canine best friends. Of course, when Jocelyn finally realizes how idiotic she's been, passing up a tasty morsel like Grigg, Bello turns it on like the pro she is. For his part, Dancy (Evening) shares some mean chemistry with Bello and plays the Jane Austen novice with style; as his eyes are opened to Austen's writing, so are the audience's. Blunt--the Brit who made such a stunning American film debut in The Devil Wears Prada--plays Prudie right on the edge, evident in Blunt's perpetually teary-eyed and quivering-voiced performance. She's the snooty literary snob of the group but her personal life is in shambles--married to a kind man (Marc Blucas) who doesn't really understand her, which prompts Prudie to consider having a fling with a charismatic high school senior, Natch. As the more veteran members of the cast, Baker, Brenneman and Smits are all a little more predictable in their roles but well-fitted for the story nonetheless.
Jane Austen is one o 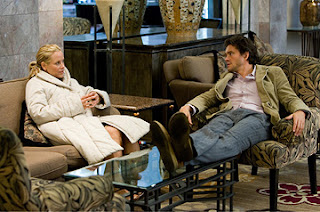 f those rare cases in which the movie is as good—if not maybe better—than the book. That's a true testament to writer/director Swicord. While the book occasionally plods, the movie mostly zings right along. Swicord cuts through Fowler's long expository passages on the characters' pasts and succinctly recaps each one's individual backstory without ever showing it. Instead, Swicord focuses her attention on the intertwining relationships as they relate to Jane Austen's nine novels. The only drawback could be that Jane Austen tends to be sappy—but it is its exuberance for Jane Austen and her work that gives the film its pulse. True, this movie is for women, by women, but as far as a lesson on the late 18th century novelist, Jane Austen is far more entertaining than taking an English college course on Victorian writers. Let's just say, if the movie doesn't get you to read a Jane Austen novel, nothing will.
If you have seen the film already, please tell us your opinion and comments. I cant wait to see it!
Pic 1: The Jane Austen Book Club book cover at amazon
Pic 2: The Jane Austen Book Club film cover at new orleans box office review
Pic 3-5: Taken from Yahoo Movies

I have seen it and my reaction was "it's cute" but too modern for my taste. It reminds me of a movie made to cash in on the Jane Austen current craze without any "real" substance for our day. I (almost) have to see it again to catch all the Austen references, if I had nothing better to do. But do go see it for yourself. It is a fun show.

i really liked this movie, it was predictable in some parts, but overall it was definitely a feel-good film. it really inspired me to read all of jane austen's wonderful novels again!

Director Robin Swicord made Little Women AND Memoirs of a Geisha?! Wow! This movie is a must see, then! I hear you dearest Linda, and I might have similar opinion as well; i.e. it's a fun chick-lit show. But it should be fun to watch it after a heavy month of survey...

I saw it a couple of days ago. It is a feel good movie! :) I really enjoyed it. Especially what they said about JA fancying naughty men! ;)

I really have to read the book now!

/ love from Maria in Sweden

I managed to get to see it last night on its opening night in the UK. It was really good; really feel-good as I expected. The casting was excellent, particularly Emily Blunt as Prudie. I did have to agree with Linda, it is really going for the 'modern' feel which does work but is indeed adding to the Austen craze that has taken over at the moment.

I have not read the book but hear the movie was different? I liked it and yes, it was very feel-good which is a lovely treat! I expected it to be formulaic to certain extent but was surprised how well they weaved in JA stories in a modern way. If your a fan of the stories you'll have fun spotting all the connections and references.

It is a nice way to introduce some to JA works.

There were quite a few men in the audience. Almost half, and seemed to be a date movie.