DVD and Blu-ray release date for the U.S; fan-fictions 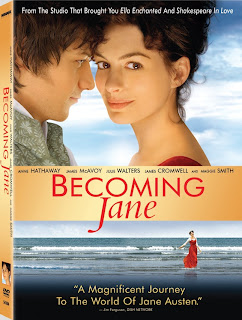 I would like to give special thanks to James Kwak for informing us the 'Becoming Jane' DVD release date for the U.S. Although the information is not yet available in Amazon, but James retrieved the info from DVDactive.com that the DVD would be available on 12 February 2008. Still a very long way to go and I have no idea why they have to be so slow in the update, but at least we know now the due date. This is what DVDactive says:

Miramax Home Entertainment has announced Becoming Jane which stars Anne Hathaway, James McAvoy, and James Cromwell. This Julian Jarrold directed romantic comedy, will be available to own from the 12th February, and should retail at around $29.99. The film itself will be presented in anamorphic widescreen, along with an English Dolby Digital 5.1 Surround track. Extras will include a commentary with director Julian Jarrold, writer Kevin Hood and producer Robert Bernstein, deleted scenes, Becoming Jane Pop-Up Facts & Footnotes, and a Discovering the Real Jane Austen featurette. A Blu-ray release will also be available for $34.99.

This other site also confirms James' information (scroll down a bit). Hey, could it be possible that the date 12 Feb is Oscar-related? Anyway, I think I will buy the DVD. Not just to compare the UK and the US versions, but also for collection, for they have different covers! ^_^

Disney has also lend the hand for the Blu-ray version as confirmed by highdefdigest.com. Click Wikipedia to learn more about Blu-ray technology. Release date of the Blue-ray version is the same as the DVD (12 Feb 2008).

Also, I finally managed to write the 4th chapter of If I Loved You Less, thanks to Rachel for the beta. The chapter is now available in the fanfiction.net. I hope you enjoy it, though it's mostly about Tom and Mary.

I also found some new Becoming Jane fan-fictions in the Jane Austen section of the fanfiction.net.

1. Love Always Wins by Wolfy101, an alternate universe where Tom Lefroy and Jane Austen got together in the end... in a fair world. I find this one-shot a beautiful piece

2. The English Sort of Love by 23ViciousMittens, about eight rambles or vignettes of BJ. Nice ones. Reminds me to resume my BJ Vignette :-D

3. Touch by Adrienne Garcia. A conversation between Tom and Jane after the dance. Lovely.

Check them out, ladies and gents!

Pic: DVD cover to the US version of 'Becoming Jane', from DVDactive.com

Hello ladies!
Still haven't heard anything about the DVD release here in Sweden.

And I think I am to post the first part of my fan fic on the net. i think... maybe. If I dare.

lots of love/ maria from sweden

YAYY!! A U.S. release date? I swiveled around in sheer joy in my office chair when I read that!

And looking forward to checking out the fanfics soon :)

Thank you so much, Ladies! Maria, do email me when your fanfic is already online; I would love to read it and inform the others about it.

Icha, I am now a member at fanfiction.net but they have a two day window until I can upload my story. :) Part one is on the way.

Wow, February!! I'm so glad I got the UK dvd, although I can only watch it on my laptop, grrr....