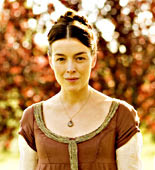 Both Miss Austen Regrets and Sense & Sensibility will air on BBC One in the UK in the week of December 30, 2007. We will look out for definite screening dates, so watch this space!

Meanwhile, the first picture of Olivia Williams as Jane Austen in Miss Austen Regrets has just been released.


The BBC are featuring two interviews with Sense & Sensibility cast members. Here is an excerpt from Charity Wakefield's interview:

Wakefield's musical grounding in the piano and her trained soprano singing voice meant that she was able to learn the advanced pieces that the music-loving Marianne performs. 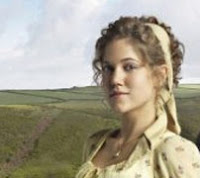 "In order to make sure that I knew what I was doing, I bought myself a keyboard and practised the pieces a lot," says the accomplished actress. "It's not me playing on the soundtrack but I wanted to be familiar with the music in the scene. And I wanted to give the camera crew the freedom to shoot me from a variety of angles."

"While we were filming, we had almost constant rain storms," says Wakefield. "It was a bit of an obstacle, really. Everybody, by the end of the day, was absolutely soaked and I had very frizzy hair. There is a great wet-shirt scene, where Dan Stevens, who plays Edward Ferrars, is chopping logs in the rain. He does look rather dashing!"

And from David Morrissey's interview: According to Morrissey, Davies’s adaptation is very true to Austen’s novel. "Davies is very respectful of Austen because he’s done such great adaptations in the past," he says.

"It’s a full adaptation of the novel," he says. "Even though I am a great fan of the film, I thought that it concentrated on the two girls and that it was a wonderful piece of work, but I think the TV adaptation is able to concentrate on the whole breadth of characters in the book."